Confusion in Alabama as same-sex couples get marriage licenses 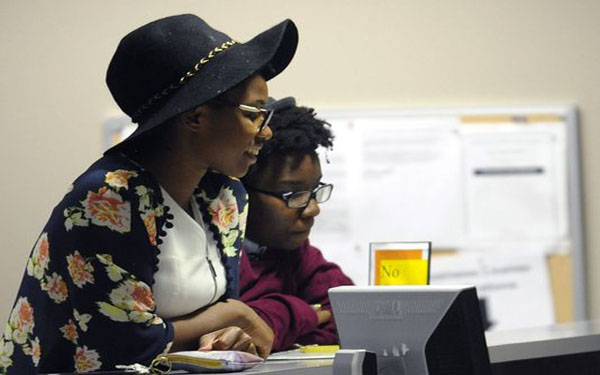 Tori Sisson, left, and Shante Wolfe get their marriage license Feb. 9, 2015, at the Montgomery County Probate Office in Montgomery, Ala.
(Credit: Mickey Welsh, The (Montgomery, Ala.) Advertiser)

FAIRHOPE, Ala. — Alabama began issuing marriage licenses to same-sex couples after the U.S. Supreme Court on Monday refused to block gay marriages and some local officials decided not to heed a last-minute order from the state’s chief justice against issuing the licenses.

It was a day of confusion as some local probate judges, who issue marriage licenses in Alabama, grappled with conflicting orders on the issue that has divided communities, especially in the Deep South. With Alabama, 37 states and the District of Columbia now have legal gay marriage.

The Supreme Court had decided to take on the issue on a national basis after four federal appeals courts struck down state bans on gay marriage and one allowed such bans to stand. A ruling in that case is expected by early summer.

Supporters of gay marriage argue that the matter is a question of constitutionally protected individual rights. Opponents say states should have the right to determine their own policy especially in places such as Alabama, where voters overwhelmingly voted to limit marriage to a union between a man and woman.

Monday’s 7-2 decision may have sent a strong signal that a majority on the high court will back striking down bans on gay marriage and that even judicial conservatives think the fight may have come to an end.

“This acquiescence may well be seen as a signal of the Court’s intended resolution of that question,” Justice Clarence Thomas wrote in his dissent in the case. “This is not the proper way to discharge our … responsibilities. And, it is indecorous for this Court to pretend that it is.”

Thomas went on: “Today’s decision represents yet another example of this Court’s increasingly cavalier attitude toward the States.”

In January, U.S. District Judge Callie Granade determined that Alabama’s statutory and constitutional bans on gay marriage were unconstitutional, but she put her order on hold to allow the state time to appeal her ruling.

The state had requested that the hold be extended, but the U.S. Supreme Court on Monday refused to do so, paving the way for same-sex marriage licenses to be issued.

Gov. Robert Bentley said he was disappointed that the courts had overturned his state’s ban of gay marriage, but added that he would not take action against any probate judge who issues a license to a same-sex couple.

“This issue has created confusion with conflicting direction for probate judges in Alabama. Probate judges have a unique responsibility in our state, and I support them. I will not take any action against probate judges, which would only serve to further complicate this issue,” the governor said in a statement.

“We will follow the rule of law in Alabama, and allow the issue of same-sex marriage to be worked out through the proper legal channels,” he said.

Attorney General Luther Strange echoed the governor’s comments: “I regret the Supreme Court’s decision not to stay the federal district court’s ruling until the high court finally settles the issue this summer,” he said. “In the absence of a stay, there will likely be more confusion in the coming months leading up to the Supreme Court’s anticipated ruling on the legality of same-sex marriage.”

In Alabama, such confusion was apparent when the state’s chief justice, Roy Moore, issued a letter to probate judges Sunday night, warning them against issuing marriage licenses to same-sex couples, though critics questioned whether he had the authority to do so.

Moore has been an outspoken critic of gay marriage and called homosexuality evil in 2002. In 2003, he was ordered out of his post for refusing to obey a federal court order that he remove a large Ten Commandments monument from the state judicial building. He won election back to the office in 2012.

Strange made it clear in his statement that he would not get involved in whether probate judges should follow Moore’s order.

“To clarify my authority in this matter, the Alabama attorney general’s office does not issue marriage licenses, perform marriage ceremonies, or issue adoption certificates. The chief justice has explained in a public memorandum that probate judges do not report to me. I advise probate judges to talk to their attorneys and associations about how to respond to the ruling,” he said.

The state probate judges association has urged officials to act in accordance with the U.S. Supreme Court ruling.

Pastors across Alabama reacted differently to the advent of same-sex marriages in their state, Monday.

At the northern end of the state, in Huntsville, Baptist minister Ellin Jimmerson had already presided over two weddings by lunchtime. “It’s been a good day,” she said. She said she had not received word, good or bad, from the Southern Baptist Convention. “Maybe they just haven’t heard yet,” she said, laughing.

At the other end of the state, in coastal Fairhope, pastor Jerry Henry sat in a study lined with books such as Biblia Hebraica and Analytical Greek New Testament, pondering what the changes might mean for the church.

“We don’t believe the Scripture condones marriage between two people of the same gender,” he said. Beyond the immediate question of wedding ceremonies, he said, the judges’ decisions could set up a larger clash between church and state.

“If we go against the law,” he said, “we could lose our tax-exempt status. There are some serious implications, here.”

After Monday’s ruling by the U.S. Supreme Court, applicants in many parts of the state joyfully received their licenses in scenes similar to those in many of the other states to have legal same-sex marriage. Some of the applicants had been waiting for hours.

“It’s about time,” Shante Wolfe, 21, told reporters in Montgomery. She and Tori Sisson of Tuskegee had camped out in a blue-and-white tent and were among the first in their county given a license, The Associated Press reported.

In Birmingham, one of the gay-marriage licenses went to Dee and Laura Bush, who said they have been together for seven years and have five kids between them.

“It is great that we were able to be part of history,” Dee Bush told the AP. After receiving their license, she and Laura walked outside to a park where a minister was performing wedding ceremonies.

Susan Watson, executive director of the American Civil Liberties Union of Alabama, said she has heard that judges in four of the state’s 67 counties have refused to issue marriage licenses to same-sex couples.

Judges face the risk of lawsuits for refusing to issue the licenses, Watson said.

“I would really think long and hard before defying a federal court order,” she said.

In the more urban counties surrounding Montgomery and Birmingham, probate judges began to issue same-sex marriage licenses. But in Bibb and Tuscaloosa counties, probate court officials said they would continue to refuse to issue such licenses.

“Right now we’re not going to do it,” Probate Judge Jerry Powell told the Los Angeles Times. “We have direct orders from the state Supreme Court here in Alabama, and I’m going to adhere to it.”

“We need more information from the state on what we need to. More clarity is needed,” said Lisa Whitehead, chief clerk of the probate court in Tuscaloosa County, home to the University of Alabama.

Moore had no immediate comment on the U.S. Supreme Court decision, according to his office.

(Teague reported from Fairhope, Muskal from Los Angeles and Phelps from Washington.)

US News
Prolonged social distancing would curb virus, but at a high cost
696 views

US News
California gunman was ex-Marine who might have suffered from PTSD, sheriff says
1,022 views