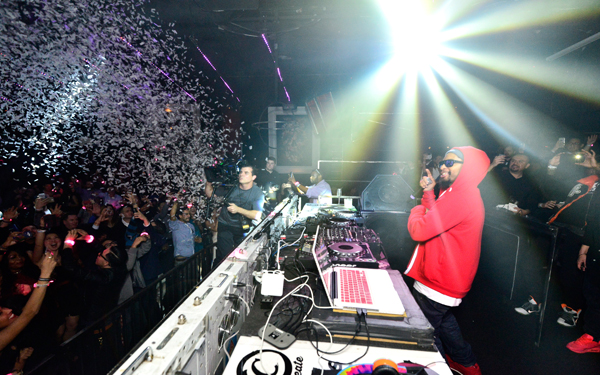 After all the awards, the stellar performances, the Kanye-isms, the Kanye tweets and the viewing ecstasy that was Sir Paul McCartney grooving to Electric Light Orchestra, a gang of giddy weekend warriors capped off Grammy night with champagne and Lil Jon.

On Sunday night, Pandora threw its second annual Grammy After Party at Create Nightclub in Hollywood. As guests indulged—tuna tartar, pork belly and an open bar was on hand—the King of Crunk was on the turntables, spinning everything from spine-quivering tech house to hip hop classics. The only challenge was to execute your party-rock shuffle or your stanky legg without slipping on all the confetti.

Question: have you ever seen Lil Jon’s eyes? The forever-spectacled rapper turned DJ opened his set by informing the crowd of his intentions: “This ain’t no wake. Get another drink, get out yo seat and let’s get crazy!”

From then on it was a blur of Biggie Smalls, strobe lights and artillery-style fog machines dowsing the crowd from above.

Music’s biggest night deservedly has even bigger after parties. Pandora and T-Mobile teamed up for their post-Grammy bash, providing music lovers, high off the evening’s energy, a release in the form of a dance floor. And with the help of Lil Jon, everyone left with sore legs and a smile.

But before the evening’s end, Lil Jon, his diamond grillz glistening under the strobe light, addressed the crowd: “It’s muthaf—kin’ turn up time, bitch!” Thereafter, he closed out his set with the obligatory nightclub anthem, “Turn Down for What.”