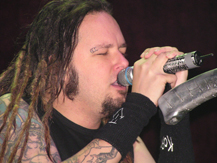 The children of the Korn came out to play once more, this time at the nearly sold-out Long Beach Arena where dudes busted out their wife-beaters, army fatigues and the occasional wallet chain, and the dudettes simply arrived as sexy arm candy.

Jonathan Davis and crew were ready to hypnotize their followers with Davis’s usual grunts and growls, but this time the sound and onstage visuals were turned up a notch. Added to the festivities was a fantastical drum and percussion section equipped with huge gong cymbals, tom toms and even an additional drummer to accompany the adrenaline-fueled sticks of David Silveria. As a backdrop, a video screen played gruesome scenarios such as floating decapitated bodies and creepy insects.

After guitarist Brian “Head” Welch defected to Jesus Christ’s team, it would seem that Korn’s hell-raising fire would be doused, but not so, the veggie side dish still proved to be hot and fresh. Highlights included old school favorites such as “Freak On A Leash” from 1998’s Follow the Leader and “Falling Away From Me” from 1999’sIssues.

The time machine soon turned to “way back” mode with “Shoots and Ladders,” compliments of their 1994 self-titled debut. What joy it brought to see the scary wicked Davis strut out in his best Scottish kilt! With furry pom poms dangling near his privates, Davis played the intro to “Shoots” on his native bagpipes.

On the flipside, Korn’s performance and stage show appeared to be a slicker and shinier version of their former shows, where mass mayhem and raw-edged aggression dominated. What happened to the multitude of swirling mosh pits that used to fill the venue floor?

While sprinkling the fans with fist-pumping oldies, Korn also needed to shove some of their new music from See You On the Other Side down the throats of their devoted fans. Tunes such as the singles “Liar” and “Twisted Transistor” were naturally on the list, yet the unexpected ballad was included in the encore. Revealing his more melodic tender side, Davis’s rendition of “Tearjerker” was near beautiful, a pleasant surprise that contrasted the often unintelligible rapping and guttural groans that reflect his usual singing style.

Korn’s show finished with the song that began it all, a song that Davis admits is the reason that the band exists today. Shouting the phrase that swept five guys from the boredom of Bakersfield, Calif., the lyrics, “Are You Ready?” kicked off the fan favorite, “Blind.” With Fieldy thumping the bass and James “Munky” Schaffer cutting licks into the air like a machete, Korn left the stage with fans pumping fists and Davis propelling Korn T-shirts onto the audience. Seems that after more than a decade, Korn can still galvanize rock into its hardest form.