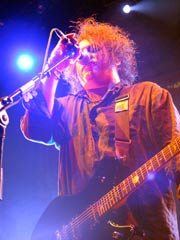 Each of Curiosa’s seven handpicked bands that accompanied headliners The Cure were undeniably picked for a good reason. In one way or another, they all flashed a shade of effects showing how The Cure’s multi-faceted music has influenced their musical culture.

Head Automatica — Though they may not seem to be directly influenced by the goth-like Smith and Co., their presence was definitely felt during the band’s electronica-driven set.

The Cooper Temple Clause — Having seen them before at the Troubadour, and this band just keeps getting stronger and tighter with each performance. Included in their set list was the dynamic "The Same Mistakes."

Cursive — The punk-driven Saddle Creek, Omaha natives keep critics on their toes with heavy cello undertones above crunchy, noisy electric guitars. I don’t think it’s a secret that singer Tim Kashner’s idol is likely the headlining band’s frontman. His raging falsetto was undeniably an homage to Mr. Smith, noted in tracks off 2003’s The Ugly Organ.

The Rapture — Disco beats, a multi-talented cowbell player and thrashed out guitars equal a retro-’80s dance scene throughout this San Diego-based band’s energized set which included their breakout hit, "House of Jealous Lovers."

Interpol — The New York darlings were the sleeper on this bill, performing their set at the perfect time — just after sunset. Interpol debuted new songs off their upcoming September release, Antics.

The Cure — A step up from May’s Coachella performance but with a similar set list, legendary Smith held fans captive playing selections off their June-released self-titled album. Highlights included an acoustic ending to second encore-closer "Boys Don’t Cry," which was perhaps the night’s most interactive moment between the band and fans.