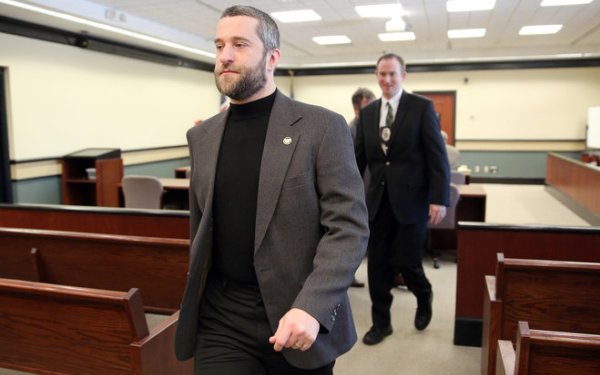 Dustin Diamond, best known for his role as Screech in the 1990s TV show "Saved by the Bell," appears during a preliminary hearing in Ozaukee County Circuit Court.
(Credit: Mike De Sisti)

PORT WASHINGTON, Wis. — The attorney for Dustin Diamond, best known for his role as Screech in the 1990s TV show “Saved by the Bell,” told a judge Thursday that he is working toward “a resolution” of charges against the former actor stemming from a stabbing in a bar on Christmas.

The attorney, Thomas Alberti, also told Circuit Judge Paul V. Malloy that if the case did go to trial, he might have a conflict representing Diamond’s fiancee, Amanda Schutz. She is charged with disorderly conduct in connection with the same incident.

Malloy set a March 19 date for Schutz to appear with a new attorney and for a status update on the case. Alberti must file any motions by March 16. A tentative trial date was set for May 27.

The complaint says Diamond and Schutz got into a tussle with two men and a woman at Grand Ave. Saloon on Dec. 25. The disturbance started after Schutz told other patrons she had had enough of them photographing her and Diamond.

Diamond, 37, told police he accidentally stabbed one of the men while trying to defend Schutz.

Malloy issued a gag order for parties and attorneys in the case but clarified Thursday that Diamond can talk to news media if he avoids the any discussion of the facts of the case. He had such an interview with Brad Hicks, an anchor at WITI-TV, which aired this week.

The judge and District Attorney Adam Gerol said they had not seen the interview.

Alberti told the judge that “lots of toxic vitriol” has been directed at his client, and “it’s hard to deflect that without some mention of the case.”

Malloy said Alberti could use his best judgment, and the judge’s concern is avoiding the kind of pretrial publicity that would make it difficult to select a jury if the case does go to trial.

Blog
How not to get arrested on campus
1,482 views

Blog
What are shade balls and do how they help save Los Angeles' water?
1,781 views

Blog
Young SoCal couple struck by lightning -- and hand-holding may have saved their lives
1,523 views