Katy Perry and others popularizing an explosion of wearable tech 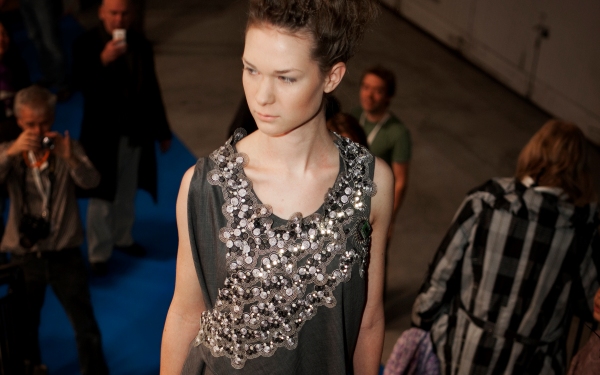 The Climate Dress from Diffus Designs has circuits integrated into the embroidery that sense varying levels of carbon dioxide in the air and activate LED lights in the dress when levels rise.
(Credit: Diffus Designs/TNS)

Wearable technology means Google Glass or Apple Watch to most. But for a few designers and fashionistas — including Katy Perry — it sometimes refers to skirts, dresses, handbags and suits.

Perry became a client of a brand called CuteCircuit after her stylist saw an exhibit featuring its LED-illuminated Galaxy Dress at the Museum of Science and Industry in Chicago. Perry ordered a similar gown (which the designers had five days to complete) and wore it to the Met Ball in New York in 2010, making headlines around the world.

Perry has since worn CuteCircuit designs on “American Idol” and “The Voice” of Germany. CuteCircuit showed for the first time at New York Fashion Week a year ago, and one of its handbags debuted on Net-A-Porter.com last fall.

“We live in a digital era, with everyone constantly on Instagram and Pinterest and Facebook, but fashion hasn’t changed for hundreds of years,” said creative director Francesca Rosella, who launched CuteCircuit in 2004 with Ryan Genz. “We really wanted to move innovation into the garments we wear.”

CuteCircuit isn’t the only brand integrating technology into fashion. Like many first-generation tech efforts, some of the results are more novelty than reality for now. But these examples, featured at a recent Museum of Science and Industry event, are nudging the needle forward.

A motorcycle jacket from Umbilical Sport, with LEDs embedded in the leather. The lights on the back and shoulders of the jacket illuminate when the rider uses his or her turn signal or applies the brakes. “It gives drivers another viewpoint for safety,” museum head curator Kathleen McCarthy said. Bicycle apparel applies similar technology.

The Oricalco shirt from Grado Zero Espace, woven with preprogrammed memory threads that automatically scrunch up the long sleeves when the air grows warm. The sleeves lengthen when it cools.

The Climate Dress from Diffus Designs with soft circuits integrated into the embroidery. They sense varying levels of carbon dioxide in the air and activate LED lights in the dress when levels rise. “You can breathe on it and watch the dress light up,” McCarthy said. It’s both a statement on climate change and on air quality in the immediate vicinity.

The Geometry Darling handbag designed by Alison Lewis for Switch Embassy. It has a full spectrum LED screen embedded behind a leather cutout. Colors can be changed via an Android phone to coordinate with clothing. Similarly, the brand’s Theia bag has an LED screen on the front of the bag that can display preset images as well as customized phrases.

A paparazzi-repelling miniskirt by CuteCircuit. If someone snaps a flash photograph of someone wearing the skirt, the reflective properties of the glass microspheres in the fabric will glare, rendering the wearer invisible in the picture.

Laser-cut necklaces by Anke Loh with a sensor that converts the wearer’s movements into varying light patterns on the jewelry. Digitally printed scarves, also by Loh, incorporate stretchable circuits to display microscopic photos from the Chicago-based designer’s long-term research project with epilepsy patients.

The fiberoptic Heartbeat Dress designed by Alison Lewis for Switch Embassy. It looks like a typical little black dress, but has biometric sensors. “If you’re wearing it out and started dancing and your body temperature and heart rate go up, the light pattern on the dress changes,” McCarthy said.

A wedding dress from Atelier LeonLeon. A Tetris-loving bride ordered it after seeing an exhibit in the Netherlands featuring its creator. The illumination can be changed via a remote control device, held by the wearer or those around her.

“There are fascinating times ahead.”

Beauty Beat
Shake things up with your makeup this pandemic season
1,398 views

Beauty Beat
The best self-care? 8 great ways to sink into a warm bath for a much-needed break
1,335 views

Beauty Beat
How to apply makeup in a masked world
1,472 views