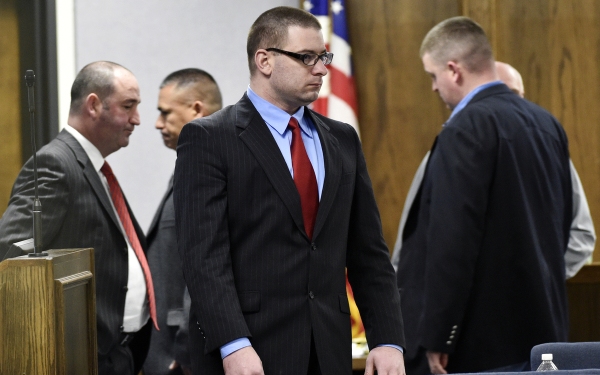 Reaction to the conviction of the man who shot “American Sniper” Chris Kyle late Tuesday was swift, emotional and in one case, chilling.

Minutes after a Texas jury of 10 women and two men found Eddie Ray Routh guilty of capital murder, a fellow SEAL and friend of Kyle’s issued a warning to the killer on Facebook in the slayings of Kyle, 38, the legendary Navy SEAL, and his friend Chad Littlefield, 35.

“Justice served for Chris and the Littlefield family,” wrote Marcus Luttrell. "To Eddie Ray Routh, you thought you had PTSD before .?? Wait till the boys in TDC Find out you killed a TX hero," referring to the Texas Department of Criminal Justice, which runs the prisons.

Like Kyle, Luttrell is a Texan who gained fame after writing a bestselling memoir about his service in Afghanistan that was also turned into a blockbuster movie, “Lone Survivor,” starring Mark Wahlberg.

Luttrell, 39, and his family knew Kyle and his wife, Taya Kyle, 40, who lived in the Dallas area and had two children.

He previously posted on Facebook that he and Kyle, “pretty much grew up in the Teams together” meaning the SEALS, describing Kyle as “a very good friend and a very good man who has seen more hell than most. Be prepared when you read his book he pulls no punches.”

His post-verdict message Tuesday was signed “Txfrog,” frog being a SEAL nickname. By Wednesday morning, the post had more than 123,000 likes.

Meanwhile, Littlefield’s parents were praising the verdict on the “Today” show.

"It was an answered prayer. We’ve waited a long time to hear that, and we feel justice was served," mother Judy Littlefield said, calling the moment in court “joyous.”

Littlefield had not served in the military, and his death was often overshadowed by Kyle’s story. At one point even Routh said he had not known Littlefield's name, which his mother said, “was difficult for us because we had to remain quiet because we didn’t want to jeopardize the case in any way. Now is the time we want to honor and talk about our precious son.”

Routh had pleaded not guilty by reason of insanity, and his attorneys presented the jury with evidence that before the shootings, he had been repeatedly hospitalized and treated for mental illness.

But on Wednesday, Littlefield’s brother, Jerry Richardson, said he had taught Routh in high school, knew his personality and that the insanity plea was “all an act."

“That’s just the way he was, he was still just opposite, defiant. He had nothing wrong in the mind except for the drug use,” Richardson said.

Routh, a former Marine, was convicted of capital murder after a nine-day trial and 2 1/2 hours of deliberations in the fatal shootings of Kyle and Littlefield during the trio’s trip to an outdoor shooting range near here on Feb. 2, 2013.

Prosecutors declined to seek the death penalty, so he was sentenced late Tuesday to life without parole.

Afterward, Texas politicians were also quick to praise the outcome.

Taya Kyle, Chris' wife, left court fuming during the defense attorneys’ closing statements, never to return Tuesday. But Kyle’s parents, brother and other relatives and supporters stayed to see Routh convicted. They emerged afterward in tears, embracing in the courthouse hallway and leaving without comment.

During the sentencing that followed Routh’s conviction Tuesday night, Littlefield’s father and brother made impassioned statements condemning the killings, which he had confessed to, and his excuse: that he was insane and suffered from post traumatic stress.

“You wanted to be a Marine, a real man, but you destroyed the opportunity by committing a senseless act,” Richardson said, adding, “You have put yourself in a world you will never escape.”

Don Littlefield reminded a packed courtroom gallery about Routh admitting that he didn't know Littlefield's name before he killed him.

"Now you will have the rest of your wasted life, each and every day, to remember his name,” he said, spelling it out.