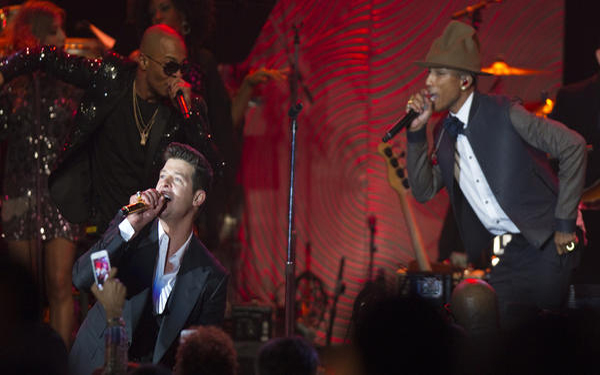 Pop singer Robin Thicke was expected to testify Wednesday in a trial over whether his 2013 hit "Blurred Lines" was derived from Marvin Gaye’s 1977 copyright-protected song “Got to Give It Up.”

The proceeding began Tuesday with songwriters Thicke and Pharrell Williams on hand. The debate over whether elements of "Blurred Lines" were plagiarized will continue Wednesday in a downtown Los Angeles federal courtroom.

A jury must determine if the songs are similar enough and whether to award damages to Gaye’s family.

Janis Gaye, the mother of two of Gaye's children, was reportedly expected to be the first to take the stand in the lawsuit.

In October, a U.S. District Court judge ruled that the late singer’s family had "made a sufficient showing that elements of 'Blurred Lines' may be substantially similar to protected, original elements of 'Got to Give It Up.'"

As Billboard reports, an opening statement Tuesday by the Gaye family attorney focused on inconsistencies between depositions made by Thicke and Williams and media interviews in which they credited the influence of Gaye and "Got to Give It Up."

The pop stars' attorney told jurors in his opening statement to take seriously the depositions, not what the men told the media.