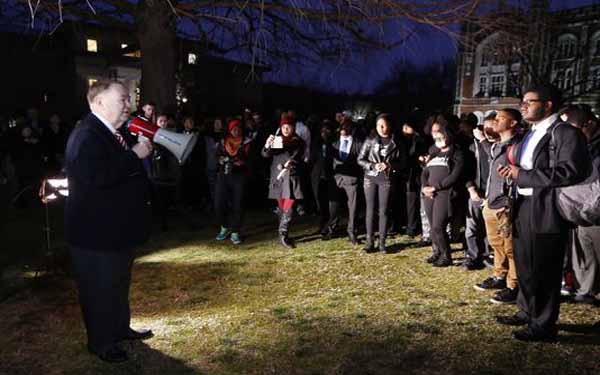 University of Oklahoma President, left, speaks with students as they protest against a campus fraternity's racist comments on March 9, 2015 in Norman, Okla.
(Credit: Steve Sisney, The Oklahoman, via AP)

The SAE house was quiet Monday morning. An OU police officer sat in a cruiser in the front lot. To the north of him, a ladder pas perched against the wall, evidence of that morning's removal of the chapter's letters from their brown brick wall that faces east towards campus. On the north side of the building, it appeared a vandal had tried to write in black spray paint the words "tear it down," however, only the "d" in the last word was completed.

Several fraternity members and their family members hauled armfuls of clothing and baskets carrying stereos and toiletries to cars and SUVs parked in the back of the fraternity house. Several members declined to comment.

"I'm not doing questions," said a tall, blonde man wearing a backpack who identified himself as a member. He loaded a basket of clothing into the back of a SUV as he scrolled through his phone before he walked back into the fraternity house.

Several other young men carried boxes out to a Uhaul parked in the front parking lot, and three car loads of young men and women pulled up and walked into the house, sour looks on their faces. Requests for comment were declined as they made their way inside.

9:20 a.m. NORMAN — University of Oklahoma President David Boren released an update to his statements regarding a racist video made by members of the OU Sigma Alpha Epsilon fraternity.

“Effective immediately, all ties and affiliations between this University and the local SAE are hereby severed. I direct that the house be closed and that members will remove their personal belongings from the house by midnight tomorrow. Those needing to make special arrangements for positions shall contact the Dean of Students,” Boren stated. Check NewsOK.com for updates.

8 a.m. NORMAN — University of Oklahoma President David Boren addressed a student protest and rally on the north oval of the Norman campus in front of Evans Hall Monday morning organized after a racist video was allegedly made by students.

Boren is also scheduled to hold a press conference at 11 a.m.

A video purportedly made by Sigma Alpha Epsilon fraternity members that has gained nationwide attention since it surfaced Sunday night was lambasted by Boren Monday.

The national headquarters of the SAE fraternity has announced the OU chapter has been disbanded.

A statement released by Boren said: “I have been informed of the video, which shows students engaged in a racist chant. We are investigating to see if the video involved OU students,” Boren stated. “If OU students are involved, this behavior will not be tolerated and will be addressed very quickly. If the reports are true, the chapter will no longer remain on campus. This behavior is reprehensible and contrary to all our values.”

Check NewsOK.com for updates to this story.

See all the coverage from today:

Visit The Oklahoman at newsok.com