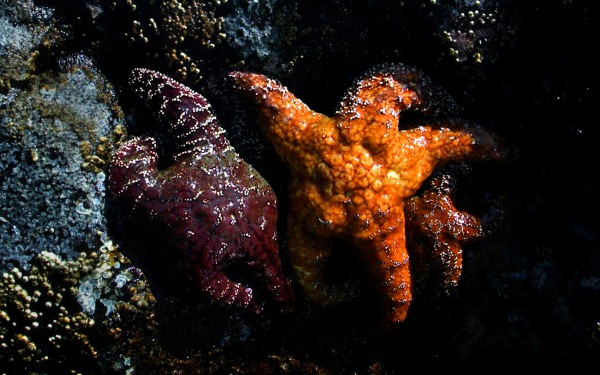 Starfish cling to the edge of a tidal pool along the coast of Bandon, Oreg.
(Credit: Rick Loomis/Los Angeles Times/TNS)

WASHINGTON — With millions of starfish dying all along the West Coast, Washington state Democrats in the U.S. House of Representatives say it’s time for Congress to intervene and find out why.

The outbreak, first noticed in the state by rangers in Olympic National Park in June 2013, has hit 20 species of starfish, also known as sea stars.

After getting lesions on their bodies, the sea stars begin curling up and soon lose their legs, shriveling up and disintegrating into mush.

Researchers fear the epidemic may be the result of a virus caused by climate change, with the disease showing its fastest progression in warmer ocean waters.

“There has never been an outbreak of disease in natural populations of animals that I know that’s been this large,” said Drew Harvell, a professor of ecology and evolutionary biology at Cornell University who’s been studying the starfish deaths on the San Juan Islands, in northwestern Washington state.

“The truth of the matter is we have absolutely no system in place to respond. None,” Heck, a second-term congressman from Olympia, said in a speech on the House floor.

Heck’s bill, called the Marine Disease Emergency Act, would require federal agencies to create a rapid response plan and free up research money for scientists, though it’s uncertain what it might end up costing.

For starters, Heck wants Congress to set aside $12 million to coordinate research among federal agencies. And his bill would create a marine disease emergency fund in the Treasury Department to accept public donations for the effort.

Democratic Rep. Derek Kilmer of Gig Harbor, Wash., who teamed up with Heck in 2013 to create the Puget Sound Recovery Caucus, said he wanted to back the effort because starfish were “turning into goo” and their survival was necessary for the health of the region’s waters.

“They’re a keystone species: You take them out of the sound or out of the Pacific Ocean and it hurts animals like fish and whales that are higher up on the food chain,” Kilmer said in an interview. “We can’t have essential species like starfish disappear. That would cause dire impacts.”

Harvell said dead starfish had been discovered all along the West Coast, from Alaska to Mexico. She said the epidemic hadn’t been studied as extensively on the East Coast but that sea star deaths had been reported in many states, including Maine, Massachusetts, Rhode Island, Louisiana and Florida.

“It’s pretty horrific,” she said in an interview. “They develop large lesions in the body wall and their organs start to fall out of those and their arms walk away. … The first priority in any disease outbreak is to figure out what’s causing it. It’s something we’re equipped scientifically to deal with. We have all the tools, but they cost money.”

Heck introduced a similar bill last year that did not pass. Proponents of this year’s legislation acknowledge that it will be a tough sell in a Congress that’s getting little done beyond the basics.

Heck, who held up a rubber starfish when he promoted the bill in his speech on the House floor last month, said in an interview that backers of the legislation had one big weapon on their side.

“We’re helped greatly by the kind of tragic visuals that come out of melting starfish,” he said. And he hopes that the public’s familiarity with starfish will boost the cause, too: “If you live anywhere near a coast, you’ve walked on that sand and picked one up.”

With 12 co-sponsors backing his bill — including members from California, Florida, New Jersey and Oregon — Heck said it was proof that the epidemic was a national issue. He said his bill would create a national data repository to quickly disseminate any research linked to starfish deaths in all states. And it would set up a national volunteer working group to advise the federal government on marine disease emergencies.

“The origin of my passion dates to being a kid on the Washington coast and picking them up, seashells and sea stars,” Heck said. “If you grow up here and your parents go camping on the coast, it’s one of those wondrous things. … It tugs at my heart. This is a massive kill-off, and we have absolutely no federal mechanism to respond.”

Harvell is hoping Congress will change that.

“This is a start, and you’ve got to start somewhere,” she said. “I’ve certainly done a lot of soul-searching about this: Why should people care about starfish when we’ve got some really huge human-related issues internationally? ISIS is just one small example, and poverty and food issues. But you know, starfish are sentinels about conditions in our oceans, which are a huge economic interest to us. Starfish are special.”

His bill, called the Marine Disease Emergency Act, would:

Appropriate $12 million to coordinate research and require a response by the federal government within 120 days of being signed into law.

Set up a national data repository to aid the rapid dissemination of research.

So far, no similar bill has been introduced in the Senate, but Heck said he’d asked for help from Washington state Democratic Sens. Patty Murray and Maria Cantwell.