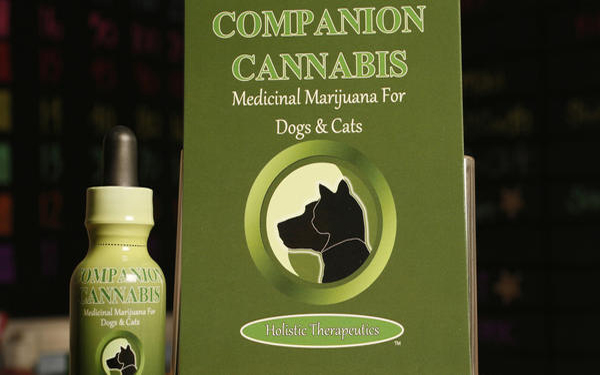 CARSON CITY, Nev. — So your dog is literally on its last legs. The end is near and Fido has stopped eating. You want to bring an end to his pain.

What to do? Under a bill proposed this week in Nevada, you can get him medical marijuana.

Legislation introduced in the state Senate on Tuesday would allow pets to use pot under a veterinarian’s supervision.

Democratic Sen. Tick Segerblom, the sponsor of SB 372, says there are guidelines, even for Fido: Officials would be able to issue a pet medical marijuana card only if the animal’s owner is a Nevada resident and a vet certifies the creature has an illness that might be helped by marijuana. And the illness need not be fatal.

Segerblom told the Los Angeles Times that the idea isn’t as far-fetched as it might seem.

“People these days believe that marijuana can cure everything under the sun,” he said, “from the inability to eat if you’re terminally ill to problems with your nervous system. So if your dog has a nerve disease or uncontrollable tremors, this might be able to help it.”

Segerblom said the animal pot-use provision is part of a bill that makes some corrections to the state’s medical marijuana statute. He said he was looking for ways to strengthen the former legislation when he heard from numerous constituents who wanted to know why their pet couldn’t benefit from the pain-assisting benefits of pot as well.

“This was an omnibus bill; it includes everything including the kitchen sink,” he said. “There are a lot of things in it, but this is the one addition that people seem to be fixating on.”

Segerblom said he’d give pot to his own pets “if a veterinarian says it’s OK.”

The state senator said he has received calls from people with a question: If they have a medical marijuana card, can they then give the drug to their pets?

The answer is, ahem, no: Fido would need his own card to be legal.

“That will change if we get a law passed for recreational marijuana use,” Segerblom said. “And it’s going to happen. We’ve already got 100,000 signatures to get the issue on the ballot next year.”

Still, the idea of giving pot to animals has its skeptics. People like state Sen. Mark Manendo.

“I’ve never even heard of this,” he told the Los Angeles Times. “Are there vets out there who would even know if this works on animals? There are lots of questions.”

Segerblom said he knew of no other U.S. state that has passed such a law.

“This could be a whole new industry,” he said.

By Tuesday afternoon, social media were alight with wise-acre comments on the bill.

Wrote one prankster: “It’s for my koi and gerbils. Officer, I swear!”

And: “How exactly does a dog hold a doobie? Just curious.” (Answer: They don’t inhale. It’s added to food.)

And: “Who’s the pet food lobbyist in Carson? Are they behind this? Pets get the munchies….”

And finally: “And thus was born the term that the (Nevada Legislature) often moves slower than a stoned sloth.”

In fact, a company called Canna Companion produces a medical tincture for dogs and cats that it says provides the benefits of the cannabis plant while “minimizing the ‘high-inducing’ concentrations of THC.”

According to the company’s website, the product is legal because it “is not intended for human consumption, it meets the current definition of hemp supplements under United States federal law.” The company says that in higher concentrations, some compounds in pot “can be toxic to dogs and cats. That is one reason we do not advocate blowing marijuana smoke in your pet’s face or administering human medical grade Cannabis to pets.”