California first state to get 5 percent of electricity from solar 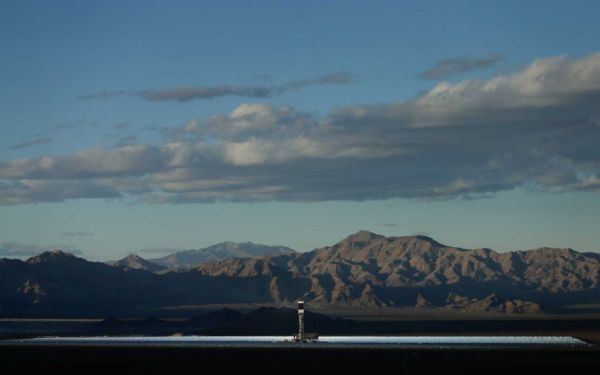 California has become the first state to get 5 percent of its electricity from large-scale solar facilities, such as the Ivanpah solar power plant in the Mojave Desert.
(Credit: AP Photo/Chris Carlson)

The federal government reported Tuesday that California has become the first state to get 5 percent of its electricity from large-scale solar power installations. In 2014, solar power plants in California generated 9.9 million megawatt hours of electricity, more than all other states combined.

And the report, from the U.S. Energy Information Administration, doesn’t even count the output of rooftop solar arrays on homes and many businesses. Only installations capable of generating at least 1 megawatt of electricity were included.

California law requires utilities to get 33 percent of their electricity from renewable sources by 2020. That law prompted a wave of solar power plant construction that peaked in the last two years, with massive plants coming online. Some of those facilities —such as Topaz and Desert Sunlight — use the same photovoltaic panels that homeowners slap on their roofs. Others — including the Ivanpah plant designed by Oakland’s BrightSource Energy and funded by Google — employ fields of mirrors to focus sunlight (although questions about the amount of electricity Ivanpah actually generates continue to dog the plant).

Their opening rapidly boosted the amount of solar power in California’s energy mix. According to the administration, large-scale solar accounted for 1.9 percent of California’s in-state electricity generation in 2013, jumping to 5 percent last year. Only Arizona and Nevada came close, with big solar plants accounting for 2.8 percent of 2014 generation in each state.

For California, the sudden influx of solar power came at a fortuitous time. The government report notes that solar surged just as California’s main source of carbon-free power — big hydroelectric dams in the Sierra foothills — started plunging, due to the drought. Measured in megawatt hours, electricity from new solar facilities in 2014 made up for 83 percent of the power lost from hydro dams.

With another disappointing rain season now ending, don’t look for that source of electricity to rebound anytime soon.