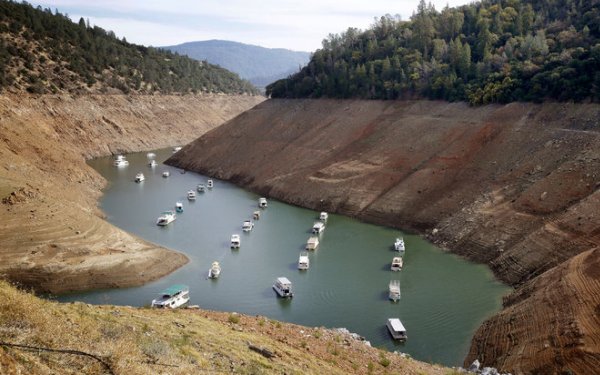 PHILLIPS, El Dorado County — Standing in a browned meadow that should have been buried in deep snow, Gov. Jerry Brown ordered California’s first-ever mandatory water cutback, imposing a 25 percent reduction to force residents and businesses to significantly tighten up water use.

Brown’s historic executive order came Wednesday under sunny skies in the Sierra Nevada as he stood with snow surveyors who had not a flake to measure on the ground at Phillips Station. The news statewide was worse than expected: Snow depth was calculated at 1 to 2 inches — far from the record low of 27 inches in 1977 during one of the state’s worst droughts on record.

“People should realize we are in a new era,” Brown said. “The idea of your nice little green grass that gets water every day, that’s going to be a thing of the past.”

Brown directed the State Water Resources Control Board to make the water reductions mandatory by requiring water districts to force restrictions on urban water users. Currently most agencies have asked customers to voluntarily cut back. The 25 percent is based on water usage from 2013.

•Prohibits new homes and developments from irrigating with drinkable water unless a water-efficient drip irrigation system is used.

•Requires 50 million square feet of lawns throughout the state to be replaced with drought-tolerant landscaping through programs with local governments.

•Requires farmers to report more information on their water use to state regulators.

'We have to pull together’

“We have to save water however we can, and we have to pull together,” Brown said.

The Sierra snowpack is a crucial barometer of how much water the state will have available in the current year. California is in its fourth year of drought, and with the Sierra snowpack recording new lows not only in the depth but in the water content of that snow, little runoff is expected to replenish the state’s reservoirs. The water content was 5 percent of normal on Wednesday — the lowest it’s been since records were compiled starting in 1950.

Snowmelt makes up 60 percent of the water that is captured in California’s reservoirs and, during a normal year, it provides about 30 percent of the state’s overall water supply.

“This is bad news in terms of the state’s water picture,” said Frank Gehrke, chief of the California Cooperative Snow Survey Program.

Snow surveyors take manual measurements at more than 230 places to record the Sierra snowpack. Gehrke said an “astounding” number of the sites have been bare this year — as many as 60 to 70 percent. The statewide snowpack average is 63 inches on April 1, the date water resources officials use as a benchmark because it is when the snow normally begins to melt and fill up the state’s reservoirs. Last year, the snowpack was at 33 inches.

This year’s statewide average is 1 to 2 inches.

“No one has seen anything like this,” Gehrke said. “This is absolutely the lowest amount of snow on record. There is no doubt about that now.”

The governor’s move follows his earlier calls on Californians to voluntarily cut back 20 percent of their water use.

“We are getting about 9 percent,” Brown said. “That’s not enough.”

A 25 percent mandatory reduction in water use across the state would save approximately 1.5 million acre-feet of water over the next nine months, which is nearly as much water as is currently in Lake Oroville.

Water board Chairwoman Felicia Marcus said the agency has the authority to fine water agencies that are not complying with the mandatory 25 percent cut with a $10,000-a-day fine and “we aren’t afraid to use it.” The governor’s announcement did not come as a surprise to local water agencies.

“We were waiting for a miracle March, but it was miserable March instead,” said Abby Figueroa, spokeswoman for the East Bay Municipal Utility District. “We knew this was coming, and we were working toward having as much of a drought response as possible.”

The East Bay district’s board is considering a drought surcharge of 25 percent on average on all users so that it can buy additional water, Figueroa said.

The East Bay water agency is also considering imposing excessive-use penalties on customers who consume four to six times as much water as average.

“He hit it hard. That will get people’s attention,” Ritchie said.

The agency is awaiting additional direction from the California Water Resources Control Board, but Ritchie said he expects the restrictions to target the highest per capita users and outdoor irrigation use.

“It’s a good time to think about whether or not to kill your lawn,” he said.