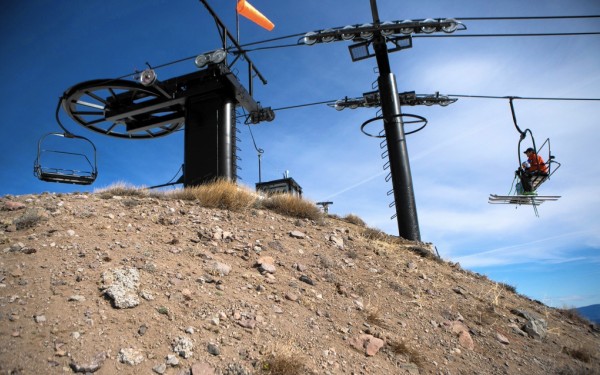 The Beach Cities Ski Club had eight ski trips planned for Mammoth Mountain this winter but paltry snowfall forced the cancellation of about half of those excursions.

With their snow-centric fun melting away, the club's members had to come up with an alternate plan.

"When the conditions were not great at Mammoth, we would just go to the beach and play volleyball," said Bruce Lee, president of the Hermosa Beach-based club.

"We've realized that we have to be in the mountain recreation business," said Bob Roberts, chief executive of the California Ski Industry Assn. "You can't just be in the ski business only."

An estimated 5.2 million skiers visited ski resorts in the Golden State this winter season, far below the 7.4-million-visitor average over the last several years, Roberts said.

When state officials measured the Sierra Nevada snowpack on April 1 near Lake Tahoe, they found the lowest water content for any early-April reading since 1950, measuring only 5% of the historical average, according to the California Department of Water Resources.

"Mother Nature was not into miracles this year," Roberts said.

Ski resort operators nationwide predict overall visitation numbers will be about 57 million, about the same as last season, partly because good snow conditions in Colorado, Utah, Wyoming and Montana were offset by extreme weather that kept skiers away from the slopes in the Northeast, said Michael Berry, president of the National Ski Areas Assn.

National sales numbers for snow sports equipment and apparel have been mixed.

Ski and snowboard equipment sales were down 3% to 6% in the six months that ended in December compared with the same period the previous year, but the sale of snow apparel rose 2% to 4%, according to the Snowsports Industry of America, a trade group for snow sports equipment and clothes.

Ski resort operators had hoped for heavy snowfall in March to extend the season into the spring and, perhaps, the first weeks of summer. But the storms never materialized, forcing Southern California resorts such as Bear Mountain and Snow Summit to close March 30, about two weeks earlier than the traditional end of season.

Mammoth Mountain, the most popular resort for Southern California skiers, plans to operate until June, thanks mostly to its extensive snow-making system. During heavy snow seasons in the past, Mammoth Mountain has run its ski lifts as late as July 4.

Skiers and snowboarders are adjusting to the new "normal" weather conditions.

The Long Beach Ski Club scheduled several weekend trips this winter to Mammoth Mountain, but toward the end of the season the members noticed that the snow was patchy.

"Not all runs were open and you could tell coming down some of the slopes that they were starting to have problems covering the ground," club President Kris Flaig said.

The group plans to return to Mammoth Mountain next year. But in search of better snow, he said, the group is considering adding a weeklong trip to a resort in Canada, where snow is plentiful.

"You just don't know what is going to happen," Flaig said of next winter's snowfall.

The good news for ski resort operators in California is that cold weather and snow arrived this season at the perfect time to cover the ski slopes with real or artificial snow just before the busy Christmas holiday period and the Presidents Day weekend.

"It wasn't a lot of snow but it fell at the right times," said Pete Sonntag, chief operating officer for Heavenly Mountain Resort in South Lake Tahoe.

Thanks to the opportune timing of the snow, Bear Mountain and Snow Summit in the San Bernardino Mountains expect to draw about 15% more visitors this season than the previous season, said Bear Mountain spokesman Chris Riddle.

But those increases were offset by a dramatic drop in visitors at many smaller resorts around Lake Tahoe and Mt. Shasta, Roberts said.

Resort operators are hedging their bets against more dry winters by investing in summer activities.

Snow Summit hopes to get approval next month to build a new beginners mountain biking trail from the top of the peak, set to open by July 4.

"Our goal is to have more activities that will engage a wider range of people," he said.

The resorts around Lake Tahoe also are investing in summer attractions.

The upgrades are part of a $25-million commitment made by Vail Resorts to expand summer activities at its resorts. Vail operates Heavenly, Northstar and Kirkwood in the Lake Tahoe area of California and Nevada.

The U.S. Forest Service is supporting such efforts. The agency approved new policy guidelines last year to allow resorts operating on forest land to build year-round recreation activities. The federal government estimates that the new summer activities already proposed on forest land will draw up to 600,000 additional visitors a year.

Despite California's four dry winters and the extreme weather across the country, ski industry officials say the future of the nation's snow sports looks bright.

"People are pretty passionate about skiing and snowboarding," Berry said. "They may not buy new equipment but they will come back with a vengeance."