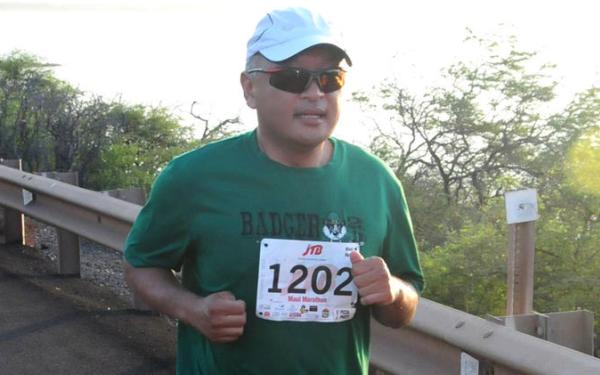 Vinh Truong, pictured in this Facebook photo, was killed in the avalanche that devastated the Mt. Everest base camp following Saturday's earthquake in Nepal, officials said.

Michelle Fennessy had been following her old friend’s dream trip from afar.

On Thursday, Vinh Truong shared a video from his journey in Nepal – images of cows, punctuated with his comments about how loud and dusty the surroundings were. He was setting out for the Mt. Everest base camp, he told friends on Facebook.

On Saturday, when news hit that the camp had been devastated by an avalanche, Fennessy rushed to contact Truong.

“Please check in, let us know you’re okay,” she wrote on his Facebook page. But there was no answer.

On Monday, the State Department confirmed that Truong, a Vietnamese-American man who lived in Sunnyvale, Calif., was among the four Americans killed at the hikers’ base camp in Saturday’s avalanche.

“To me, there was just no way he could have died on that mountain,” Fennessy told The Times in an interview. “He is just such a survivor.”

The two met while Truong was working toward a master's in business administration at the University of Chicago, Fennessy said. She was a doctoral candidate at the time, and the two bonded over good wine and the outdoors, she said.

She was struck by Truong’s quirky sense of humor, frank advice and ability to stay cool under pressure, she said.

“He was just an original,” Fennessy said. Once, when the two were hiking in the hills of the Bay Area near where he lived, they got separated from their group. As night fell and the temperatures dropped, Fennessy said, she panicked, and even got a little angry that they were lost.

“It occurred to me we might have to sleep in the woods,” Fennessy said. “Vinh just didn’t let it get to him. He was very methodical and very calm, and he just said, ‘We’re going to get out of this.’”

They eventually found their way back, albeit a bit late for dinner.

When his car was stolen recently, an aging Honda Civic from the early 1990s, he was more angry at the loss of emergency hiking gear and supplies he always kept in his trunk.

Truong was an avid outdoorsman, Fennessy said, and enjoyed river rafting, paragliding, and “anything that could be slightly dangerous.”

Pictures on his Facebook page showed him in racing clothes and skydiving from a plane at 13,000 feet.

But his first love was hiking, Fennessy said, and climbing Mt. Everest had been his biggest dream for the 10 years she’d known him.

When she last met with him -- for a dinner in March in San Francisco -- he was excitedly finalizing his Everest trek plans, she said.

“It really hurts me to think that it was painful for him,” Fennessy said. “But I think to myself, he lived, and he did what he always wanted to do.”

Aside from his knack for adventure, Fennessy said, Truong also loved board games and had strong family ties. When Truong's mother died a few years ago, Fennessy said, he moved back to California from Chicago to be closer to his family and help care for his elderly father.