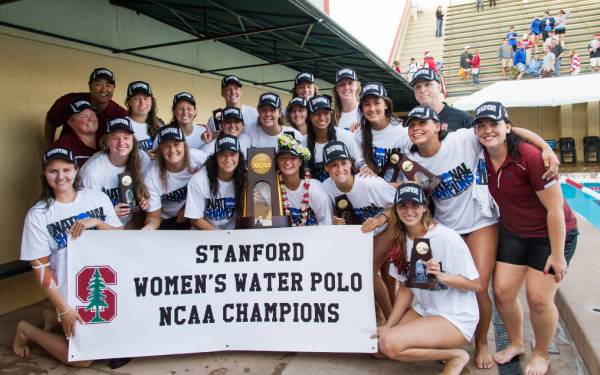 In a bid for history, Stanford got the break it needed with 11 seconds left in the NCAA women's water polo title game to become the first team crowned national champion in its own pool Sunday night at Avery Aquatic Center.

"This place has done so many great things for me," said senior Kiley Neushul, who netted the game-winner on a 5-meter penalty shot, her fifth goal in a 7-6 victory over No. 1 UCLA. "And I'm on cloud nine because we celebrated correctly today."

It was a controversial ending, with the referee penalizing the Bruins (26-3) for calling a timeout without possession.

No. 2 Stanford (25-2) had just failed to convert a 6-on-5 power play, but before UCLA coach Brandon Brooks could call a timeout his goalie threw the ball into open water following a mad scramble for the rebound.

The ruling was upheld after a meeting between the officials.

"It was the two best teams in the country playing for a national championship," Brooks said. "As a fan, as a coach, as a player, that's all you can ask for it's to get there and to get a shot at it. It is haunting for me to think about the players and how to go forward through this. And you can talk a lot about the character that you get from sports and all of the wonderful things that you get from being a part of a team and all of that.

"It is shameful for it to end like that."

It was the fourth NCAA title in five years for the Cardinal, and fifth overall. It also kept a streak alive of 39 years with at least one national championship for the university.

"I feel like having won, we'll feel a little better about bidding to host maybe again," said Stanford coach John Tanner, whose team won all three meetings with UCLA this season at Avery Aquatic Center.

Neither team led by more than a goal at any point, with the Cardinal trailing 3-2 after the first quarter. But Stanford rallied to reclaim the lead as Ashley Grossman and Neushul converted power plays, with the seniors combining for all seven goals.

"After we played Princeton, I was kind of a mess," said Grossman, referring to Friday's victory in the quarterfinals. "I was worried that I wouldn't bring the leadership that other seniors in the years past have done. ... And I heard from a lot of my teammates and coaches that it would come, and it did. Maggie (Steffens) told us that we both were the only scorers, and I had no idea. It's great that that happens, so without even trying it was awesome that we showed up as seniors."

Steffens, the MPSF player of the year and tournament MVP, collected three assists and will sit out the upcoming season to train for the 2016 Summer Olympics in Rio de Janeiro, Brazil -- where she hopes to reunite with Neushul and Grossman.

"These were my original Stanford recruiting class girls and we have a very tight bond. I'm going to miss them a ton," Steffens said. "I think they showed their passion and their poise and their heart in this game. And I know, personally, I was fighting for them. I was fighting for this team. Kept on putting their faces on the back of my mind that I would not let them lose this game. There was no way that we would let them walk away without a national championship."

UCLA pulled even at 4-all by halftime, then it became a trade-off between Neushul and Burlingame grad Charlotte Pratt, who scored twice in the fourth quarter for the Bruins, her hat trick tying the game 6-6 with 2:45 left in the game.

"That fourth quarter was a crazy adventure," Tanner said. "I felt like just holding even just took a huge amount of energy, tons of perseverance, it just showed tons of character for our team."

The final sequence began with 40 seconds left as Stanford junior Gabby Stone recorded her ninth save and UCLA was almost immediately whistled for an exclusion.

Out of a timeout, Steffens' shot from close range on the power play was denied, but Tanner instructed his team to chase any loose balls.

"It's unfortunate," Tanner said of the ruling by the referee to award the 5-meter penalty shot with 11 seconds left. "But like I said, we had to fight throughout that fourth quarter and it felt like it was just an uphill battle just to stay even throughout, that my sense was we were not going to be denied."

While the controversy swirled outside the pool, there was no doubt who should step up for the Cardinal.

"What was going in my head is you get kind of hot during a game and you look at your teammates and they're like, 'You got it, you got it,' " Neushul said.

Without any hesitation, Neushul skipped the 5-meter penalty shot into the cage.

Then it was a matter of holding on for 11 seconds before the rest of the Cardinal jumped into the water to celebrate a historic national title at Avery Aquatic Center.

"Normally the team will throw me, but they all ran right by us," Tanner said. "It was up to the coaches to do our own deal and that's kind of a bad look. But what can you do?"