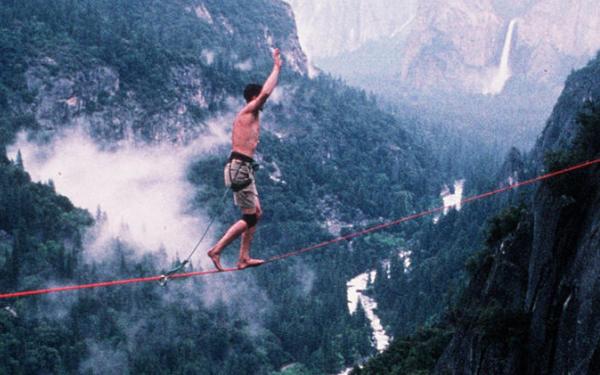 Dean Potter walks on a slackline in Yosemite in 1998.
(Credit: Kevin Wells)

As word spread that Dean Potter and Graham Hunt had died in a BASE-jumping accident over the weekend, friends and fellow rock climbers from across the West converged on the park Monday to pay tribute to two men who considered this valley and its granite monoliths their home and proving ground.

Potter, 43, and Hunt, 29, wore wingsuits when they leaped at dusk Saturday from Taft Point, a promontory about 3,000 feet above the valley floor. The two were attempting to clear a “notch” on the granite but slammed into the rock face instead.

Related: For Dean Potter, BASE jumping was spirituality, not sport

As friends and fellow climbers gathered Monday outside Yosemite Lodge -- a popular gathering spot in the park -- they shared memories of Potter and Hunt and tried to come to terms with their deaths.

Potter was one of the top climbers of his generation. He had been pushing the boundaries of extreme sports with free climbing, crossing lofty chasms on a slackline and by BASE jumping -- leaping from fixed structures and cliffs with only a parachute, and sometimes, in a wingsuit designed to allow the jumper to soar through the air like a flying squirrel. BASE-jumping is prohibited in U.S. national parks.

Friends recalled Hunt as a mellow, humble and talented young climber who, inspired by the feats of Potter and others, represented the next generation of the sport.

Dean Fidelman, 59, a friend of Potter and Hunt, traveled from Santa Cruz after hearing the news. “I promised that if something happened I would come here,” he said.

Potter was so meticulous and calculating in his approach to climbing, slacklining and BASE jumping, Fidelman said, that he expected him to outlast his contemporaries, even in a highly risky sport where Potter himself had lost close friends.

“I expected him to be an old man and take care of me,” Fidelman said.

Tom Evans, 71, a climbing photographer from Crestline, Calif. who has known Potter for decades, said his death “was extremely sad but it was not unexpected. Because Dean was out on the edge of everything … he was at the forefront of three sports, all of which are quite dangerous.”

Potter’s longtime friend Jim Hurst, 51, of Telluride, Colo., was in the Grand Canyon when he heard the news of the accident. So he got in the car and went to Yosemite, honoring Potter with a long trail run up to Taft Point, near where Potter died, when he arrived in the valley on Monday.

“I needed to come here to say goodbye and to be here with his energy,” Hurst said. “Dean was always so psyched for me to visit and share in the beauty of Yosemite. And that’s what he wanted for all of us.”

Yet in Yosemite’s tight-knit community of rock climbers and BASE jumpers, the prospect that Potter or his contemporaries' feats could one day be fatal is not a remote possibility. Many of Potter’s friends said they knew the risks of the sport and had openly discussed and prepared for the sudden death of a friend or loved one.

Lori Butz, 42, of San Francisco, knew Potter and Hunt and has lost other friends to BASE jumping.

“Both loved Yosemite very much and did it not because it was illegal but in spite of it,” she said. “It’s getting to do the most awesome thing in the world in the most awesome place in the world.... The pursuit of human flight is universal. Doesn’t everybody want to fly?”