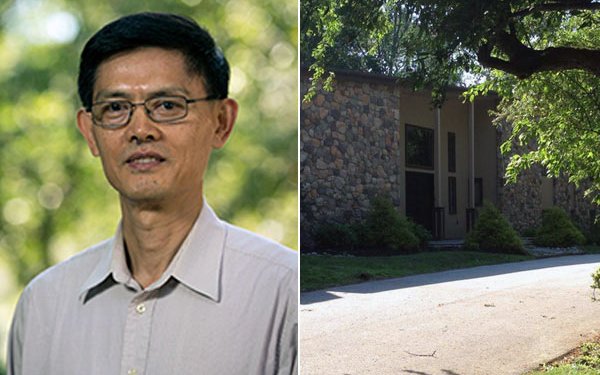 PHILADELPHIA — The chairman of Temple University’s physics department lost his leadership post Friday, one day after federal authorities accused him of illegally sharing sensitive U.S. technology with entities in China.

Xiaoxing Xi, a naturalized U.S. citizen, however, would remain on the faculty, officials said.

The case against Xi, who was charged with four counts of wire fraud, left colleagues, researchers and former students perplexed and wondering how the professor they knew as a leading luminary in the field of superconductor research had ended up as the latest target in the government’s efforts to stanch the theft of trade secrets by China and Chinese businesses.

“It’s shocking to me to see what happened yesterday,” said Temple Provost Hai-Lung Dai, a chemical physicist who is from Taiwan. “He’s a person of very high integrity. This is the reason we appointed him to department chair.”

Others were more reticent to respond. Several of Xi’s postgraduate research assistants declined to comment Friday. Past students cited current sensitive posts at the U.S. Department of Energy or NASA in their decisions to stay quiet.

At Xi’s house — set along a tony, tree-lined street in Penn Valley where he resides with his wife and two daughters — no one answered the door Friday. Notes from reporters were shoved in the door frame and under the windshield wipers of a car in the driveway. A defense lawyer paced the block waiting to offer his services.

Boise State University physics Professor Dmitri Tenne, at least, was willing to stick up for his old boss. He worked under Xi at Pennsylvania State University as a postdoctoral student between 2000 and 2006 and said the professor treated him well.

“He was nice to me,” Tenne said of their time in the lab together.

But it was during that same period, federal prosecutors say, that Xi was attempting to leverage his access to U.S. trade secrets into lucrative and prestigious postings in China.

Before coming to Temple in 2009, Xi minted his reputation as a leader in research surrounding the growth of superconductive magnesium diboride thin films while on the faculty at Pennsylvania State University.

Such research has allowed engineers to eliminate resistance in the conduction of electricity, which has applications ranging from building smaller circuits for smart phones to improving speed in computers.

According to the indictment unsealed Thursday, Xi took a sabbatical from his post at Pennsylvania State University in 2002 to continue his work at a U.S. company that invented a device that revolutionized his field.

Prosecutors have declined to name the firm or describe the device in question. However, records from Pennsylvania State University and Xi’s curriculum vitae say he spent his 2002 sabbatical working for Conductus, a California firm, specializing in manufacturing electronic equipment and systems for telecommunications companies.

Conductus merged with another business — Superconductor Technologies Inc. — soon after. Officials for that company, now based in Austin, Texas, declined to comment on Xi’s past work.

It was after his return to Penn State in 2003, prosecutors allege, that Xi sought a U.S. Defense Department grant to purchase the device from the company to further his research.

The company initially resisted Xi’s efforts, the indictment says, but eventually agreed to the sale for one year only when Xi signed a contract promising only to use the device for testing and agreed not to reproduce it, sell it, transfer it or attempt to reverse engineer it.

Citing several 2010 emails Xi sent to contacts in China — in which he offered to build a world-class thin film laboratory there — they say he offered to exploit the technology for the benefit of Chinese entities, including the government, and used his postdoctoral students from China to share the information abroad.

Xi was released on a $100,000 bond after his arrest Thursday. It remained unclear Friday whether he had retained a lawyer.

National security experts said that the kinds of crimes of which Xi stands accused are similar to those in dozens of prosecutions brought by federal authorities in recent years. They have become the latest front, experts say, in an ongoing contest for an innovation edge between the United States and China.

Earlier this week, federal prosecutors in San Francisco unveiled their case against a Chinese university professor and five other Chinese citizens for allegedly stealing wireless technology from a pair of U.S. companies.

Federal authorities in Philadelphia said there was no connection between that case and Xi’s.

The six California defendants face charges of economic espionage, which require prosecutors to prove the thefts were carried out to help a foreign government.

Xi’s four counts of wire fraud for violating his contract with the unnamed U.S. company requires no such proof, even though federal authorities list China’s government as one of the entities with which Xi sought to share the sensitive technology.

Still, government-controlled Chinese news agencies have blasted the U.S. prosecutors, equating the case of the California six with that of Wen Ho Lee, the Chinese-American scientist accused in 2009 and later acquitted of stealing U.S. nuclear technology from the Los Alamos National Laboratory in New Mexico.

Of Xi, Zia maintained, his contributions to American science must have been significant for him to reach his position as chairman of Temple’s physics department.

Dai, Temple’s provost, said Friday that Xi’s past research made him an attractive candidate when the university set out to recruit him from Penn State in 2009. He was appointed chair of the Temple physics department a year ago.

The news of charges against Xi came the same week as the university announced it was starting a Confucius Institute for the study of Chinese language and culture. The school will partner with China’s Zhejiang Normal University, which will send two Chinese language professors here to teach in the institute. Such institutes have been controversial in some academic settings because they are in part funded by the Chinese government.