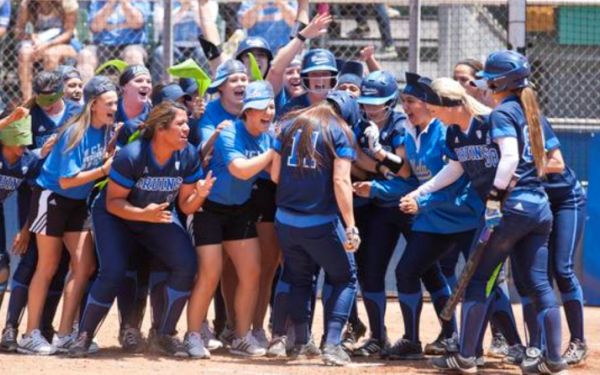 UCLA softball is going back to Oklahoma City.

The No. 7 Bruins have earned a spot in the Women’s College World Series for the first time since 2010, punching their tickets with a 10-6 win over Missouri on Sunday. The victory ended a long wait for one of the sport’s most successful programs — one that leads the country with 11 national championships, each one marked on the outfield wall.

“You just look at the fence, and you realize where you’re at,” said Tigers coach Ehren Earleywine.

But no one on the current UCLA roster has ever stood on the sport’s preeminent stage. Asked this week how a spot in the final eight-team field would feel, junior outfielder Allexis Bennett said: “It’s going to be like going to Disneyland for the first time. Kids in a candy store.”

That joy hasn’t quite gripped the team yet. Lined up in the clubhouse-turned-media room after the final out, the Bruins smiled and said that their biggest celebration had yet to come.

“I don’t think it’s truly hit me yet,” said senior pitcher Ally Carda, who walked off her home field for the last time. “I’ll probably be really excited later on.”

Heading into the weekend, head coach Kelly Inouye-Perez had framed the NCAA Super Regional as a chance for her senior class to “get payback for themselves.” Hosting Kentucky here at Easton Stadium a year ago, the Bruins won a series opener before dropping two games. Despite logging a 52-8 record — their highest win total since 2003 — they stayed at home through the final week of the softball season.

They didn’t give No. 10 Missouri the same chance. UCLA advanced to the WCWS with back-to-back wins, following Saturday evening’s 7-4 comeback with an impressive Sunday effort. The Bruins’ offense lit up in the second, batting in four runs on its way to a 9-1 lead.

After a double and a walk to open the top of the frame, UCLA (50-10) scored on a single to right field, a fielding error at second, and a two-RBI homer by shortstop Delaney Spaulding. The Bruins kept the heat on in the third with a two-run shot by Mysha Sataraka — her second dinger of the weekend — followed by catcher Stephany LaRosa’s three-run homer in the fourth.

In the circle, Carda recovered after giving up four straight singles to open the game. The two-time Pac-12 Player of the Year held Mizzou without a hit through the next three innings, and finished with four earned runs and four strikeouts in six frames.

Out of the opposite dugout, starting pitcher Paige Lowary strung together five innings across two stints, allowing five earned runs with four walks and two strikeouts. Reliever Tori Finucane entered in the top of the third, but took a line drive to the face in the fifth. After receiving a standing ovation as she stood up, the sophomore was taken to the hospital for further evaluation.

The Tigers (42-16) still fought off a potential mercy-rule finish, scratching out a two-out RBI single in the bottom of the fifth. When UCLA scored on LaRosa’s sac fly in the top of the sixth, Mizzou responded with a three more runs, trimming the Bruins’ lead to 10-5.

Missouri got one more run on Kelsea Roth’s leadoff homer in the seventh, one that signaled Carda’s exit. That gave way to reliever Selina Ta’amilo, making her career postseason debut.

The 6-foot freshman retired three straight batters: strikeout, groundout, strikeout. When center fielder Taylor Gadbois swung and missed at the final pitch, the Bruins stormed out of the dugout.

In the stands, the crowd chanted: “OKC! OKC! OKC!”