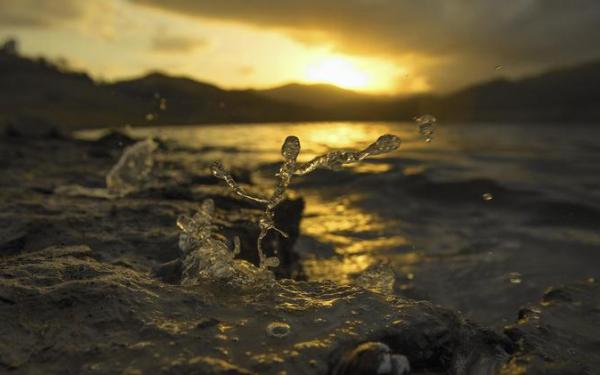 It's a technology with the potential to ease California's colossal thirst and insulate millions from the parched whims of Mother Nature, experts say.

But there's just one problem — the "yuck factor."

As a fourth year of drought continues to drain aquifers and reservoirs, California water managers and environmentalists are urging adoption of a polarizing water recycling policy known as direct potable reuse.

It's a concept that might cause some consumers to wince, but it has been used for decades in Windhoek, Namibia — where evaporation rates exceed annual rainfall — and more recently in drought-stricken Texas cities, including Big Spring and Wichita Falls.

In California, however, similar plans have run into heavy opposition.

Los Angeles opponents coined the derisive phrase "toilet to tap" in 2000 before torpedoing a plan to filter purified sewage water into an underground reservoir — a technique called indirect potable reuse.

In 1994, a San Diego editorial cartoonist framed debate over a similar proposal by drawing a dog drinking from a toilet bowl while a man ordered the canine to "Move over..."

Despite those defeats, proponents say the time has finally arrived for Californians to accept direct potable reuse as a partial solution to their growing water insecurity. With Gov. Jerry Brown ordering an unprecedented 25% cut in urban water usage because of drought, the solution makes particular sense for large coastal cities such as Los Angeles, they say.

Instead of flushing hundreds of billions of gallons of treated sewage into the Pacific Ocean each year, as they do now, coastal cites can capture that effluent, clean it and convert it to drinking water.

"That water is discharged into the ocean and lost forever," said Tim Quinn, executive director of the Assn. of California Water Agencies. "Yet it's probably the single largest source of water supply for California over the next quarter-century."

The advocates' hunch that severe drought has changed long-held attitudes on potable reuse may be on the mark.

Recently, a leader in the effort to stop the Los Angeles project more than a decade ago said he still opposed it but might consider a new plan if officials made a solid case for it. He said one of the reasons he opposed the original plan was that "incompetent" officials failed to explain their rationale to residents in the first place.

"You know, toilet to tap might be the only answer at this point," said Van Nuys activist Donald Schultz. "I don't support it, but we're running out of options. In fact, we may have already run out of options."

To be sure, it will be years, or even a decade, before direct potable reuse systems begin operation in California — if ever.

One reason for this is that there is no regulatory framework for the approval of such a system. Currently, a panel of experts is preparing a report to the Legislature on the feasibility of creating such rules. That report is due in 2016.

Potable reuse advocates insist the public's distaste for the concept is based on ignorance. They note that more than 200 wastewater treatment plants already discharge effluent into the Colorado River, which is a primary source of drinking water for Southern California.

In potable reuse systems, effluent from a wastewater treatment plant is sent to an advanced treatment facility, where it undergoes a three-step purification process.

First, the water is passed through a microfilter that blocks particles, protozoans or bacteria that are larger than 1/300th the thickness of a human hair. Next, it undergoes even finer filtration in the form of reverse osmosis, in which water is forced through a membrane that blocks fertilizers, pharmaceuticals, viruses and salts. In the third step, ultraviolet light and hydrogen peroxide are used to break down any pathogens or organic compounds that escaped the first two steps.

The result is a purified substance that is cleaner than most bottled waters, according to WateReuse California, a group that advocates for water reuse and desalination. However, it is still sent to a traditional water treatment plant, where it is blended with other sources of water, processed and pumped to household taps.

In an indirect potable reuse system, the water is placed in an "environmental buffer," such as an underground aquifer or surface water reservoir, where it is stored for a period of time before getting processed in a traditional water treatment plant. It is this type of system that was defeated in Los Angeles.

Although potable reuse advocates say opposition is often driven by a visceral response to the process, the so-called yuck factor, those who opposed the Los Angeles project said recently that they did so for a variety of reasons, including cost and the potential long-term effects of the trace quantities of drug compounds, hormones and personal care products found in wastewater and surface water.

"Personally I would not drink water that has been recycled through the toilet to tap process," said Steven Oppenheimer, a biology professor at Cal State Northridge. However, Oppenheimer said he would use such water for irrigation, and even household cleaning and bathing.

The presence of so-called contaminants of emerging concern may prove to be one of the main barriers to direct potable reuse. Because of limited scientific knowledge, these compounds are unregulated, meaning that there are no government-prescribed methods for monitoring or removing them.

Tchobanoglous and others insist these substances exist in such small quantities that they don't pose a significant issue.

To some, the contaminant issue argues in favor of using indirect potable reuse systems.

Such a system has been operating since 2008 in Orange County, where purified water is pumped into an aquifer and held for six months before being used as drinking water. Also, after its first failed attempt at establishing an indirect potable reuse system, San Diego approved a second demonstration project years later. It recently won approval to store treated water in an open reservoir as part of a pilot program.

Allison Chan, an environmental engineer who has studied the issue of why some potable reuse projects succeeded while others failed, said that an active public outreach campaign, as well as a crucial need for water, were key factors in projects that won approval.

Chan said that although education and outreach generally increased support for potable reuse programs, it also had the effect of hardening perceptions. In other words, supporters became even more supportive, while opponents became even more opposed.

Said Chan: "This just goes to show how the yuck factor can stick with some people."