'The Dancing Man' gets star treatment at Hollywood bash 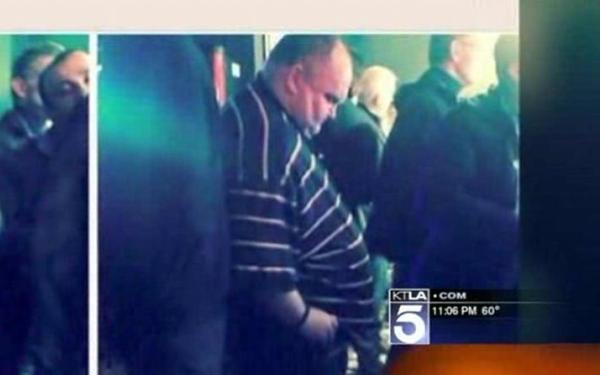 An Englishman who was body-shamed on social media after photos of him dancing went viral received a Hollywood-sized welcome when a party was thrown in his honor.

Sean O’Brien, who is known on social media as “The Dancing Man,” partied Saturday at the Avalon Hollywood alongside Monica Lewinsky, musician Andrew W.K., actress Tatyana Ali and DJ Moby to raise awareness of cyber-bullying. After celebrating with celebrities, O’Brien threw out the first pitch at Sunday's Dodgers game.

On Monday, burlesque dancer Dita Von Teese picked up O’Brien in her 1953 Cadillac, and he treated her to a taco lunch.

“To the Twitter world,” he wrote. “Thank you for being interested and making this what it is. So much good in the world we sometimes forget.”

O’Brien, 47, was the subject of cyber-bullying after photos of him dancing were anonymously posted on a social media site several months ago, along with a nasty comment.

But the online community came to his defense and drew the interest of Cassandra Fairbanks, a writer in Los Angeles.

Fairbanks launched a drive to find O’Brien, who at the time had not been identified. The movement drew worldwide attention, even its own hashtag #finddancingman.

Later, the Dance Free Movement, an anti-bullying group, launched a campaign to find him and throw him a bash.

A Kickstarter campaign raised money to pay for his flight from London to the U.S. so he could attend the party and make media appearances.

Saturday’s party was a culmination of the social media movement.

Money raised during the event will be donated to several anti-bullying campaigns.