Long Beach dedicates park to Jenni Rivera, a singer and an inspiration 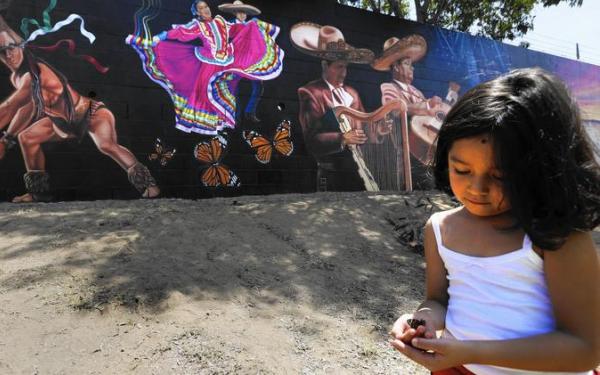 The late Mexican American superstar Jenni Rivera was something to everyone: the diva de la banda to her fans, the "Diana Ross of Mexican music" to one music executive, and a loving, hard-working mother to her family.

Rivera served as an inspiration to struggling mothers and victims of domestic violence, and was a humble donor to the needy.

On Thursday — what would have been her 46th birthday — Long Beach city officials honored the singer's legacy by bestowing her name on a park in her hometown.

"There's a lot of love for this woman," Mayor Robert Garcia said. "She was a Long Beach legend."

Rivera and six others were killed in a plane crash in Mexico on Dec. 9, 2012. Her death made international headlines and prompted vigils for several days. Two years later, Long Beach Councilman Dee Andrews, with support from Garcia and others, pushed to have a park named after the singer.

"I've always been amazed by the hurdles she had to overcome and impressed by the all the people she helped through her foundation," Andrews said. "She did not help because she had to; she helped because she knew that was the right thing to do."

Sitting next to a small neighborhood in central Long Beach, near the border of Signal Hill, Jenni Rivera Memorial Park is symbolic for the city and family members.

The area was once an empty lot made up of dirt and weeds, but was transformed into a grassy oasis that includes a small soccer field and a meandering bike path. Officials say more is planned for the park.

Chiquis Rivera, one of the late singer's five children, recalled the times when she and her pregnant mother would ride their bicycles through the area.

"It's wonderful to have somewhere where we can come as a family and remember my mother," she said.

Along a brick wall is a 125-foot-long mural honoring Rivera's life and heritage.

Dubbed the "Mariposa de barrio," the neighborhood butterfly, city officials and family members say they hope the mural and park will serve as a sanctuary for those seeking strength and hope.

Thursday's ceremony had an usual twist for a park opening: Security guards and metal barriers kept more than 100 eager fans at bay. Among them were Ana Marentes, 36, and her daughters Maricela, 20, and Beatriz, 17.

The three had flown from Richmond, Va., on Monday to attend the ceremony and a concert scheduled later in the day.

"It's amazing," Maricela said of the ceremony. "She gave women so much encouragement."

Not far away Norma Lemus, 21, of Wilmington checked her phone as she waited for the Rivera family to arrive.

"I'm happy that they're doing something like this for her because she was a great woman," Lemus said of Rivera. "I admired her for being herself."

The event included a mariachi band that performed the U.S. and Mexico national anthems; a performance by Rivera's father, Pedro; the planting of a butterfly bush; and the release of several butterflies.

Rosa Rivera, chief executive of Jenni Rivera Love Foundation, said the butterfly was a symbol of her sister's transformation from a struggling single mother to successful artist.

"To everyone here, she's not the only caterpillar that turns into a butterfly. This park is yours in the city of Long Beach, for all races, nationalities and genders alike," she said. "Wherever you are in your life, if you're dragging yourself like a caterpillar, if you're in your cocoon or you're ready to fly, Jenni Rivera will be here to walk that process with you."