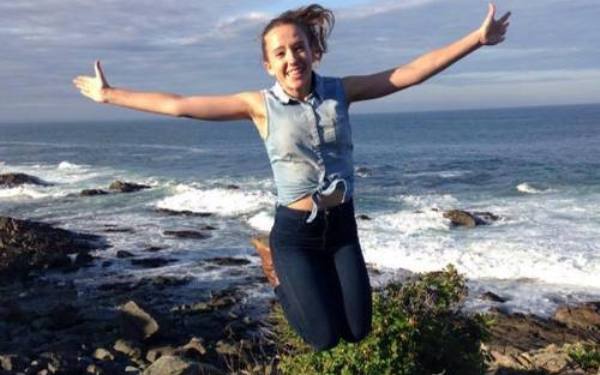 Rebecca Draper Townsend, 17, was killed when a car struck her and a friend as they crossed Lake Avenue Ext. in Danbury on July 2. Townsend was pronounced dead at Danbury Hospital, police said.
(Credit: Remembering Rebecca Memorial Facebook Page)

DANBURY — The story of a Brookfield teen, who may have saved her friend's life by pushing him away from the car that struck and killed her on July 2, is sweeping the world and inspiring people to commit acts of kindness in her name, according to posts on a memorial Facebook page set up by her family.

Rebecca Draper Townsend, 17, was killed when a car struck her and a friend as they crossed Lake Avenue Ext. shortly before 9:30 p.m., police said. According to Townsend's family, she was there to watch the Fourth of July fireworks display.

Townsend was pronounced dead at Danbury Hospital, police said. Her friend, 17-year-old Benjamin Arne, of New Fairfield, was released from the hospital on July 4.

According to a widely shared Buzzfeed article, Arne went to see Townsend's family after he was released and told them that he remembered Townsend pushing him and telling him to hurry immediately before the crash.

Townsend, who had recently graduated from Immaculate High School and was set to attend Notre Dame in the fall, had written a letter to her future self as part of a school assignment during her sophomore year, according to the eulogy given at her funeral by her sisters, Monica and Victoria Townsend, which was shared to the memorial Facebook page. In that letter, she listed a three-step "bucket list" of things she wanted to accomplish before she died.

The list said: Kiss in the rain. Fly to Spain. Save a life.

Townsend's sisters said in the Facebook post that they found the letter sitting on their little sister's bed after her death. They said their parents took her to Spain and her boyfriend had kissed her in the rain.

"Who knows why Rebecca was looking at that letter the night she left us … but I think it's her little way of telling us she is OK; she accomplished what she needed to; she made it," Monica Townsend wrote.

By Monday, 16,000 people had joined the memorial Facebook page, called "Remembering Rebecca," the Buzzfeed article sharing her story listed more than 1 million views and a GoFundMe campaign set up by the rest of the incoming freshmen class at Notre Dame in her honor had raised $3,500.

People posted messages to the "Remembering Rebecca" page from all across the U.S. as well as France, England, the Netherlands and New Zealand.

"Rebecca was an amazing person," her sister Victoria said in a short email Monday. She said that her family is taking a break from media interviews at this time, but they hope Townsend's story will continue to inspire people.

Police would not say whether evidence at the crash scene indicates that Arne was saved by Townsend's actions, but said the accident remains under investigation. Police have named the driver, a 23-year-old, but have not filed any criminal charges related to the crash.