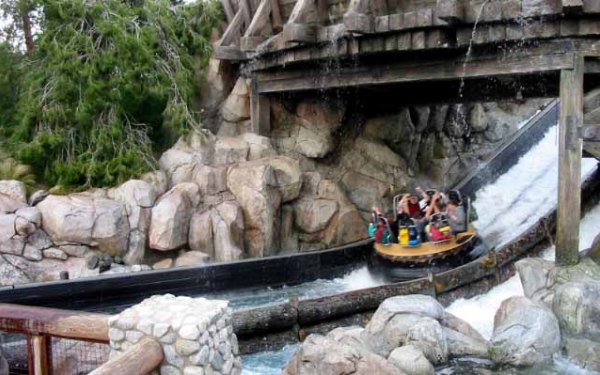 On a hot summer day, there's nothing better than getting soaking wet on a water ride at a theme park.

Unless you're like me, and you dread getting drenched to the skin at a theme park, then there's nothing worse.

I hate water rides. If I want to get wet, I'll go to a water park.

So I come at this Top 25 from a slightly skewed perspective. While I'm the worst person in the world to write about the topic, I'm also enough of a consummate professional to step back from my irrational biases and rank the best water rides in the United States.

What I'm looking for in a water ride is storytelling and theming. Far too many log flumes, river rapids rafts and shoot-the-chutes are interchangeable and indistinguishable from each other.

So as you might expect, my list is dominated by Disney attractions, with Universal Studios, Busch Gardens, SeaWorld and Six Flags well represented as well. I also managed to find room for a handful of rides from a few regional and smaller parks as well. A number of the rides appear at multiple parks in the U.S. and around the world.

I recently participated in a Season Pass podcast that focused on the best theme park water rides. The 90-minute podcast was often entertaining and if you want to hear me go on at length about my unbridled hatred of water rides you should check it out.

But for now, let's turn to the topic at hand: The top 25 theme park water rides in the U.S.

25) Whenever I'm putting together a ranked list, I always like to include a wild card or two. So I figured why not start out with a ride that isn't even open yet. Frozen Ever After replaces the Maelstrom dark ride in the Norway pavilion at Florida's Epcot. Based on the “Frozen” film, the new boat ride is expected to take visitors to Arendelle and Elsa’s ice palace during a Winter in Summer celebration. I'm sure Frozen Ever After will move up this list once it officially debuts in 2016.

24) Storybook Land Canal Boats is a leisurely paced boat ride that sails past miniature scenes from Disney’s animated films in the Fantasyland section of Disneyland. The original Disneyland ride was unfinished on opening day in 1955 with little more than signs bearing the Latin terms for weeds lining the muddy banks.

23) Built in 1927, the Boat Chute was the first ride built at Georgia’s Lake Winnepesaukah amusement park, commonly known as Lake Winnie. With a final splashdown into the lake, the classic ride is one of the last remaining mill chutes left in the world and the oldest attraction of its type still in operation in the United States, according to the National Amusement Park Historical Assn.

22) The Aquazone Wave Racers at Legoland parks in California and Florida cleverly combine a water carousel with a stand-up jet ski that skips over waves on a man-made lagoon. Spectators trigger submerged water cannons that riders try to avoid.

21) Popeye and Bluto’s Bilge Rat Barges is a nicely themed river rapids ride at Florida’s Islands of Adventure theme park that’s guaranteed to get you wet. If I'm being honest, I have to admit I hate this ride with all my heart. But a lot people love Bluto’s Bilge Rat Barges for the same reason I despise it: You will get 100% wet. Not one square inch of your body or your clothes will be dry after you get off the aptly named Bilge Rats. Fortunately there is a walk-in body dryer right near the exit.

20) Escape From Pompeii is a fairly straightforward shoot the chute with a short dark ride segment in the Italy area of Virginia's Busch Gardens Williamsburg. Amid the destruction of Mount Vesuvius, the flat-bottom boat navigates crumbling statues and burning ruins before descending an 80-foot drop that concludes with a tidal wave splash.

19) The Tsunami Soakers at Six Flags St. Louis and California's Six Flags Discovery Kingdom combine a classic teacup ride with lots of water. After the floor under the teacups fills with water, the ride starts spinning and the riders fire water guns at each other and shore-bound spectators (who are also armed).

18) Dudley Do-Right’s Ripsaw Falls is a nicely themed Islands of Adventure water ride that combines a log flume with a roller coaster track. The flume travels through several dark ride elements before plunging riders down a 75-foot drop into a dynamite shack that explodes with a burst of water.

17) Kali River Rapids at Florida's Animal Kingdom theme park was Disney's first attempt at a river rapids ride. The attraction has an illegal logging theme that ties in with the park's environmental conservation message. Located in the Asia area of the park, the river winds through a lush tropical jungle and past charred tree stumps, encountering cascading waterfalls and gushing geysers along the way.

16) I've combined the Mark Twain riverboat and the Columbia sailing ship since they travel the same route around Disneyland's Rivers of America. They both offer leisurely 12-minute cruises by day and play prominent roles in Fantasmic by night. Florida's Magic Kingdom as well as several other Disney parks around the world have similar stern-wheeler steamboats.

15) The River Battle interactive raft ride at Tennessee’s Dollywood theme park lets riders armed with soaker guns engage in raft-to-raft and raft-to-shore skirmishes. More than 100 targets line the 500-foot-long course, including talking beavers, skunks, otters and bears. Some of the spectators and even a few of the animals can shoot back.

14) The Monster Mansion at Six Flags Over Georgia is a relatively rare mill chute ride featuring nine scenes with more than 100 animatronic monsters. Dating from the park’s opening in 1967, the original boat ride told the same “Song of the South” story as Disneyland’s Splash Mountain.

13) Of all the rides on this list, I’m most conflicted about the the Journey to Atlantis water coasters at the SeaWorld parks in California and Florida. I give them both bonus points for being unique ride concepts but ultimately find them uninteresting as either roller coasters or water rides. While the Florida version has more dark ride elements and the California version focuses more on the coaster experience, both rides are clunky, outdated and uninspiring.

The Journey to Atlantis ride at SeaWorld San Antonio is different from its cousins in California and Florida. The Texas version of Journey to Atlantis more closely resembles a souped-up shoot the chutes ride with a brief backward whoop-de-do dip segment between two rotating turntables.

12) Billed as the longest, tallest and fastest river rapids ride in the world, Grizzly River Run winds around a bear-shaped mountain that serves as the centerpiece of Disney California Adventure. Sadly the ride is void of classic Disney animatronics, reportedly jettisoned during budget cuts before the park’s grand opening.

11) For my second and final wild card, I selected another Disney attraction that isn't open yet: The "Avatar"-themed boat ride at Animal Kingdom in Florida. Similar to Pirates of the Caribbean, the D-Ticket indoor attraction will take riders on a river journey through the illuminated forest of Pandora. Expect this one to become an instant fan favorite.

10) Ye Old Mill debuted a year after New York's Playland opened in 1928. Built around the supports of the Dragon coaster, the classic old mill ride travels past sometimes klutzy gnomes, a fierce dragon and evil trolls armed with water cannons.

9) The Pittsburg Plunge shoot the chutes is the centerpiece of a series of throwback rides in the Lost Kennywood area of the Pennsylvania amusement park. The unusual spelling of the name pays tribute to a brief period in the 1890s when Pittsburgh dropped the “h” from its name.

8) The Mountain Sidewinder water toboggan snakes through Dollywood’s hilly terrain amid the Smoky Mountains surroundings. The unique ride features a rubberized boat traveling along the banked curves of a water slide trough. It’s basically all the fun of a water park without having to don a bathing suit.

7) The 1969 Timber Mountain Log Ride at California’s Knott’s Berry Farm takes riders past scenes depicting a 19th-century lumber camp. The attraction was refurbished in 2013 with updated animatronic figures. The ride system was built by Arrow Development (later Arrow Dynamics), which created many of the log flumes found in theme parks around the world today.

6) You won't find any other ride in the world quite like Finding Nemo Submarine Voyage at Disneyland. The 15-minute underwater journey takes passengers through craggy caverns and past colorful coral brimming with more than 100 animatronics interspersed with cleverly disguised projection screens.

5) The Splash Mountain log flumes at Disneyland and the Magic Kingdom take riders through scenes inspired by the 1946 Disney film “Song of the South.” The California ride reused audio-animatronic figures from the “America Sings” attraction, which closed a year before Splash Mountain opened in 1989.

4) It’s a Small World at Disneyland and the Magic Kingdom takes riders on an international journey past 300 audio-animatronics figures representing singing children from around the world. The addictive, and some would say annoying, theme song was created to be sung as a round in counterpoint like the “Row, Row, Row Your Boat” nursery rhyme. The original ride made its debut at the 1964 World’s Fair in New York before being packed up and shipped to Disneyland.

3) The Jurassic Park ride at Universal Studios theme parks in California and Florida travels past animatronic dinosaurs in a jungle setting. A Tyrannosaurus rex attacks the boat just before riders descend an 80-foot drop to a splashdown finale.

2) The Pirates of the Caribbean water-based dark ride at Disneyland and the Magic Kingdom tracks the exploits and foibles of a band of pirates. In a twist, Disney based the popular film series on the ride rather than the other way around. You’ll be humming “Yo Ho (A Pirate’s Life for Me)” once you step off this Disney classic.

1) The Jungle Cruise in the Adventureland areas of Disneyland and the Magic Kingdom journeys past audio-animatronic tigers, elephants and hippos via tramp steamers along the rivers of Asia, Africa and South America. A skipper delivers a scripted narration that often includes humorous ad-libs.