Attack on lifeguard at Venice Pier captured on video 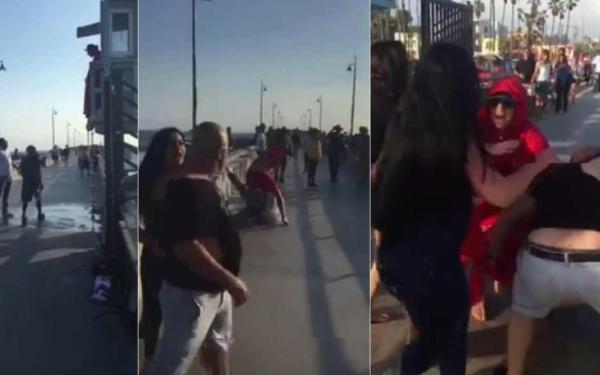 Three people were arrested after they were seen on video on social media apparently attacking a Los Angeles County lifeguard Thursday night on the Venice Beach Pier, the LAPD said.

The motive for the attack was not immediately clear, authorities said, but KTLA reported the assailants were drunk and became angry when the lifeguard asked one of them to put out a cigarette.

The fight was recorded by multiple witnesses and shows two men attacking the lifeguard as soon as he jumps off his tower ladder to the ground. The two men swing wildly at the lifeguard after pushing him toward the pier railing.

At one point, the lifeguard stands up and exchanges blows with one of the men while a bystander moves in and confronts the second attacker.

A second video shows a woman kicking at the lifeguard’s head when he was on the ground trying to get up.

More lifeguards eventually showed up and broke up the fight, video showed.

A recording of the fight’s aftermath showed one of the three suspected assailants breathing heavy, lying on his back, his face covered in blood.

The confrontation occurred about 7:15 p.m., the LAPD said. The three people seen fighting the lifeguard were arrested on suspicion of felony assault, according to KTLA.

The lifeguard was hospitalized with a minor injury. One of the lifeguard’s alleged attackers was also taken to the hospital for medical treatment, police said.

Blog
How not to get arrested on campus
1,399 views

Blog
What are shade balls and do how they help save Los Angeles' water?
1,692 views

Blog
Young SoCal couple struck by lightning -- and hand-holding may have saved their lives
1,449 views