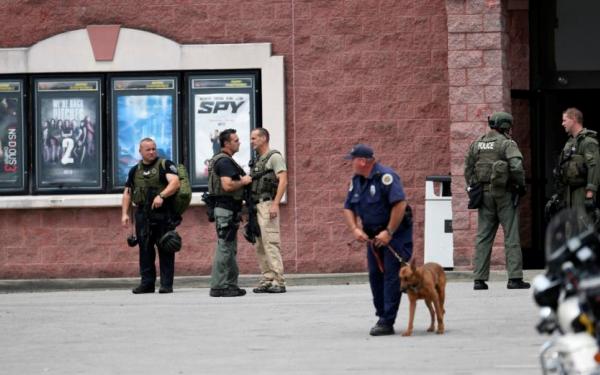 Metro Police respond to an active shooter call at the Carmike Hickory 8 theater, Wednesday Aug. 5, 2015, in Antioch, Tenn. A suspect wielded a hatchet and a gun inside a Nashville-area movie theater.
(Credit: George Walker IV / The Tennessean via AP)

A middle-aged man armed with a hatchet and gun filled a Nashville movie theater with pepper spray and exchanged gunfire with a police officer before officers shot and killed him Wednesday afternoon, police said.

The man was wearing a backpack on his chest and a surgical mask when he entered a screening of the film "Mad Max: Fury Road" shortly after 1 p.m. local time, according to Don Aaron, a spokesman for the Metropolitan Nashville Police Department.

Moviegoers fled as soon as the man began dispersing the pepper spray, Aaron said, adding that the man was the only person still inside the theater when a Nashville police officer confronted him.

After a brief exchange of gunfire, the officer retreated, Aaron said. A SWAT team entered shortly afterward, flushing the man to the theater's rear exit.

Another group of Nashville police officers shot and killed him a short time later, according to Aaron.

One man was struck by the hatchet and suffered a "superficial wound to his shoulder or arm," according to Brian Haas, a spokesman for the Nashville Fire Department. The male victim and two women were also hit with blasts of pepper spray, according to Haas, who said all three have been treated and released.

The suspect has been "tentatively identified" as a 51-year-old white man who lived in the area, Aaron said.

Aaron said members of the Police Department's bomb squad planned to detonate the contents of the backpack the man was wearing because they were "not comfortable with what they are seeing" inside the bag.

He said a second backpack was also recovered, but he declined to elaborate on the contents of either bag.

There are eight movie theaters inside the Carmike Hickory complex, and rescue officials said they were thankful the injury total was not higher.

“This could have been a lot worse,” Haas told reporters.

Police arrived at the scene in less than two minutes, according to Aaron. The officer who first confronted the gunman had been responding to nearby car accident and raced inside after several people ran out of the movie theater calling for help.

The shooting comes less than two weeks after a 59-year-old drifter killed two people and injured nine others when he unleashed a barrage of gunfire inside a movie theater in Lafayette, La. That gunman killed himself as police closed in.

The incident also occurred in the shadow of the James Holmes trial in Colorado. Jurors there are in the process of determining whether Holmes, who carried out one of the worst mass shootings in U.S. history inside an Aurora, Colo., movie theater in 2012, should be put to death.