Some first choices for dining in L.A. after last call at the bar

The Pacific Dining Car, with locations in Santa Monica and Downtown, is open 24 hours a day.
(Credit: pacificdiningcar.com)

Eating after you've had a drink or two is one the finer pleasures in life. That is, after all, why before-dinner cocktails were invented and why so many restaurants direct you to the bar before you're seated. And while a five-course dinner is perfectly lovely after an aperitif, let us also consider how great that paper plate of tacos tastes post-mojito, those Korean chicken wings after two gin martinis. After a late night out — with booze or without it — what you probably want before you head home is a good place open for an after-midnight snack. Because while you can certainly make yourself a sandwich when you get home, sitting on your car's hood eating a taco or finding a place in Koreatown still serving at 2 a.m. can be the best part of your evening. (And if you use this as a post-bar guide, remember that designated drivers love al pastor at 3 a.m. too.)

25 Degrees: This is a 24-hour burger spot on the ground floor of Hollywood's Roosevelt Hotel, a place that looks alarmingly like a bordello, where you can sit down and design a burger yourself. So if the sound of a burger topped with Hatch green chile, avocado, horseradish cream, tarragon remoulade and prelibato Gorgonzola sounds good, here's where to go for it. No one is judging you. Except maybe you, the morning after. 7000 Hollywood Blvd., Hollywood, (323) 785-7244, www.25degreesrestaurant.com.

800 Degrees: It's like Subway but with pizza and fancier ingredients. And after pitchers of beer and pool at the 35er in Pasadena, having a stranger make you a custom pizza will seem like the best idea anyone has ever had. If the thought of picking your own sauce, cheese and toppings is just too much for you to deal with, order a spicy meatball pizza and call it a night. Open daily until 2 a.m. Seven locations in L.A., including 2 E. Colorado Blvd., Pasadena, (626) 993-6455, www.800degreespizza.com.

Bella Pita: There's nothing like a Bella Pita wowshi after throwing back a pitcher at Sepi's, just south of UCLA. It's a crispy pita pocket stuffed with your choice of chicken, basterma, ground beef, an omelet or black beans, and it includes a trip to the condiment bar. This is where the real magic happens. Load up on lettuce, onions, cucumber and a rainbow of squeeze-bottle sauces, including tahini, garlic sauce, hummus and hot sauce. If you're craving falafel, they've got that too. Open daily to 2 a.m. 960 Gayley Ave., Westwood, (310) 209-1050, www.bellapita.com

Bossa Nova: When you've sampled cocktails at Bar10 in West Hollywood, you're going to need something nearby to eat — and if that something comes with doughnuts, so much the better. We're thinking fried dough or a pork sandwich will do just fine. Walk south to find coxinha (chicken and cheese doughnuts) or lombinho com abacaxi (Brazilian-style pulled pork with pineapple, Monterey jack and caramelized onions on a hamburger bun) at Bossa Nova. Open until 3:30 a.m. on Fridays and Saturdays. 685 N. Robertson Blvd., West Hollywood, (310) 657-5070, www.bossanovafood.com.

Izakaya Sasaya: The only thing that will reconcile a night of downing shots of bourbon while dodging UCLA frat boys at Q's or Cabo Cantina on Wilshire Boulevard is mentai butter udon, yakitori and chicken karaage. That salmon and spicy tuna roll you've been promising yourself since lunch will also do the trick. Izakaya Sasaya in the Sawtelle neighborhood has it all, plus more small plates and the sushi that some of us crave around midnight. Open until midnight on Fridays and Saturdays. 11613 Santa Monica Blvd., West Los Angeles, (310) 477-4404, www.izakaya-sasaya.com.

Kyochon: Sip a cocktail in a deli cup at Commissary, maybe have one of Roy Choi's vegetable dishes, then head to this chicken wing restaurant in a Koreatown strip mall. Because it's nearby and because they don't have a liquor license. When you walk in with a group of friends who insist they aren't hungry, don't believe them. Order at least 25 wings and make sure there's enough for everyone. And pay the extra dough to get all the dipping sauces. Open until 2 a.m. on Fridays and Saturdays. 3833 W. 6th St., Los Angeles, www.kyochonus.com.

Ramen Burger: Buy a round at the Lock and Key Koreatown speak-easy, then walk north on Vermont Avenue for an original Ramen Burger. It's the late-night hybrid that combines your college dorm ramen noodles and an Umami burger. It's also the same sensation that caused massive lines when it first popped up in L.A. at a Japanese grocery store in 2013. How much more fun is it to eat these in the early morning outside on the sidewalk than midafternoon in a grocery store? Guess. The burgers come on a ramen noodle bun, and if you feel like it, with a slice of cheese, a fried egg and crispy bacon. Open until 2 a.m. Thursdays to Saturdays. 239 S. Vermont Ave., Los Angeles, (213) 380-2399, www.ramenburger.com.

Quarters: Sometimes all you want after midnight, regardless of what you've been doing all evening, is grilled bulgogi, galbi, kimchi and an entire table of banchan. At this Koreatown restaurant, the concentration needed to not overcook the marinated strips of rib-eye on the grill in front of you — or burn yourself — is enough to sober you up if you've overdone it, or wake you up if you've been working too late. Do yourself a favor and dip your meat in the section of melted cheese near the grill for some fondue action. Open daily to 2 a.m. 3465 W. 6th St., Los Angeles, (213) 365-8111.

Mi Teresita or El Matador taco trucks: Los Angeles late-night tacos and burritos should be their own food group. If you find yourself in East Hollywood in the wee hours, after checking out La Descarga or maybe getting off work at 3 a.m., just cross Western Avenue to find not one but two trucks serving al pastor tacos, burritos and quesadillas stuffed with carne asada. Both trucks are good. If you can't decide on one, play rock, paper, scissors to decide. Or just get a taco from each. Open until 3:30 or 4 a.m. Fridays and Saturdays. 1174 N. Western Ave., Los Angeles.

Tasty Garden: After staying up past midnight, there's something about digging into a heap of beef chow mein or getting your hands dirty eating pan-fried prawns smothered in butter, garlic and XO sauce in the San Gabriel Valley. It's way more satisfying than eating even the same thing during normal waking hours. If you're someone who simply needs a bowl of white rice and a bottle of soy sauce, you can do that too. Open until 1 a.m. daily. 288 W. Valley Blvd., Suite 110, Alhambra, (626) 300-8262, www.tastygardenmontereypark.com.

A guide to 8 modern speak-easies in L.A.

How to find, drink and savor L.A.’s best craft beer 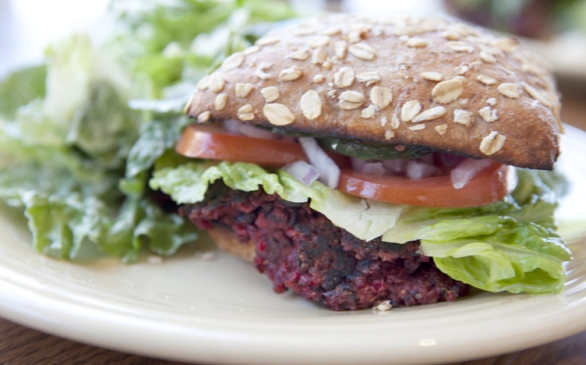