An Army Ranger School milestone, but obstacles remain for women in military 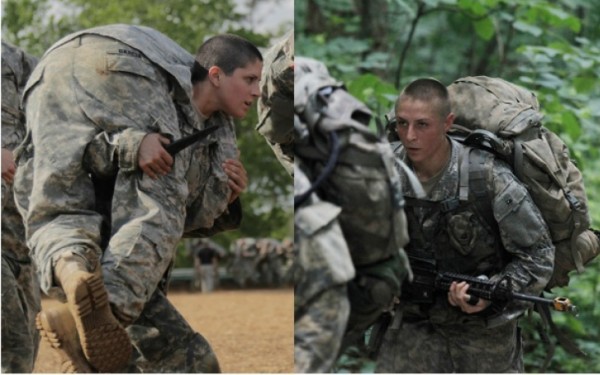 When the first two female soldiers graduate Friday from the Army's grueling Ranger School at Ft. Benning, Ga., the ceremony will mark a milestone in the Pentagon's decade-long push to integrate women into front-line military units.

It also will serve as a reminder of the obstacles women still face in uniform.

Although they get to wear the famed black and gold Ranger tab, Capt. Kristen Griest and 1st Lt. Shaye Haver cannot try out for the 75th Ranger Regiment, the Army's premier light infantry and special operations unit. The two West Point graduates probably will be assigned support jobs.

But that could soon change. The Army and other armed services face a Jan. 1 deadline to decide whether to seek exemptions from a 2013 Pentagon order ending the official ban on women in about 220,000 combat-related jobs. The secretary of Defense, Ashton Carter, must approve requests to restrict specific jobs to men.

The formal ban already is cracking, not least because thousands of women have served with front-line units in Iraq, Afghanistan and other war zones for years. Hundreds were wounded or killed. Two women received Silver Star Medals, one in 2005 and another in 2008, for action in battle.

The Navy said this week it would open its elite SEAL teams to women who can pass the punishing six-month underwater demolition and training courses. The first women also were deployed aboard Navy submarines this year.

At a news conference Thursday at Ft. Benning, Griest and Haver appeared with shaved heads, as did six male soldiers who also will become Rangers. The soldiers dismissed suggestions that the women were cut slack during the nine-week training regimen.

"No women that I know wanted to go through Ranger School if they lowered the standards," said Griest, 26, who previously led a military police platoon. "It would degrade the tab."

A native of Orange, Conn., she said the two women's success showed "we can handle things physically and mentally on the same level as men." She said she would consider applying to the Ranger special operations unit if it opens to women.

Haver, 25, from Copperas Cove, Texas, flew an Apache attack helicopter after West Point. Calling herself a "military brat" — her father was also an Army helicopter pilot — she said she wanted other women to join the Rangers.

The Pentagon has gone out of its way to showcase Griest and Haver as models for the broader changes underway, a revolution in the ranks arguably as dramatic as the racial desegregation of the military that began decades ago.

"The perceptions … about whether or not women are capable physically, mentally or otherwise, those have all broken down," said Janine Davidson, a former Air Force commander now at the Council on Foreign Relations think tank in Washington. "What's left here now would be the barriers about our social perceptions about what is doable."

In 2013, then-Defense Secretary Leon E. Panetta officially lifted the military's ban on women in combat. The directive overturned a 1994 Pentagon rule restricting women from infantry, artillery and armored units. The directive caused the military to open 111,000 jobs and programs that had been off-limits to women.

Resistance remains in some quarters, however.

Rep. Steve Russell (R-Okla.), a former Army colonel and one of four Ranger-qualified members in Congress, said in an interview that women often lacked the strength and agility to fight and survive in harsh conditions.

"I'm opposed to lowering the fitness standards for women just to score political points," said Russell, a member of the House Armed Services Committee. "There are some things they simply cannot do. I know I run the risk of being called a chauvinist pig by saying that."

Russell said he visited the Ranger training course and women were held to "lower standards," including carrying lighter rucksacks than men on long marches.

Maj. Gen. Austin S. Miller, commander at Ft. Benning, denied that charge Thursday, saying it's not true that women were given an easier time.

In all, 19 women started Ranger School in April. All but Griest and Haver washed out. Only 94 men of 381 who began the course completed it.

The training takes place in three phases — first in the woodlands at Ft. Benning, then in mountains of northern Georgia, and finally in the coastal swamps of Florida.

US News
What we know about Mark Riddell, a test-taking whiz linked to college cheating scam
541 views

US News
California gunman was ex-Marine who might have suffered from PTSD, sheriff says
944 views

US News
Rates of 3 STDS in US reach record highs CD says
1,042 views

US News
Trump’s tax cut not for everyone: 1 million Californians will owe $12 billion more next year
2,498 views

US News
Starbucks will close stores to provide racial-bias training to 175,000 US employees
1,784 views