FYF Fest highlights: everything but Kanye 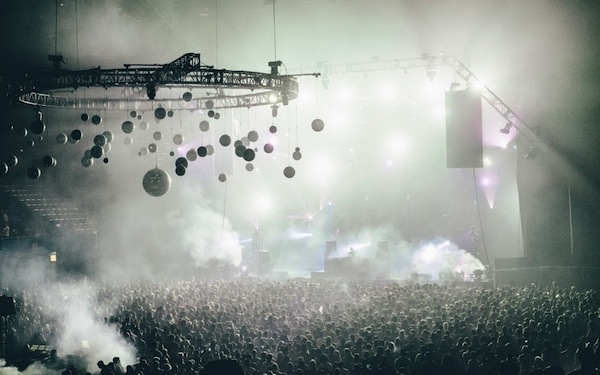 Congratulations! You made it through the groovy madness of FYF with few battle scars, lots of dust in your underwear, and even more memories that will be cherished for years to come—at least until next years Fest.

Or, do you happen to be one of the few who had other things to do, because, rather simply, you didn’t feel like crawling around in the heat fighting off the crowds just to get a glimpse of your favorite musician?

Whichever camp you belong to, rest assured we are here to guide you through what was a rather JAM-packed weekend full of the overwhelming, underwhelming, and everything in between. These highlights* are supplied with hopes of jogging the already hazy memories of the weekend, or to enrich your fantasies of what could have been while you were living your life elsewhere.

*highlights will not include the likes of Mr. Kanye West, because I assume everyone everywhere has already summed up his performance featuring Rihanna better than I ever could.

From the get-go, it was clear that the crowds at FYF were in the highest of spirits, eager and ready to step into the music. Maybe the much improved and expedited lines at the entrance had something to do with jumpstarting the good vibes, but even by 3:00 in the afternoon, it was hard not to see smiling, albeit sweaty faces everywhere you turned.

Saturday’s schedule was a rather relaxed affair, as the seemingly most hinged upon artists were properly spaced out, saving us fiends from making heartbreaking choices. You could amply check out the laid back rock of newcomer Mikal Cronin at the sprawling Lawn Stage and then easily meander on over to the wildly infectious psychedelics of France’s La Femme over at the most rambunctious stage of the event, The Trees. For those of us who wanted to avoid the sun as much as possible, DJ Dodger Stadium was in The Arena heating things up in the cool darkness with an insane, heart-pumping set.

Where things really started to take shape, however, may have been with Melody’s Echo Chamber who took the stage at The Lawn in the early evening. Not only does the young Parisian lass have the airy vocal thing down pat, but her and her band of misfits also proved that all it takes is a little spirit on stage to make the crowd fall in love with you. If the people of FYF weren’t grinning ear to ear already, they certainly were after she played “Some Time Alone, Alone.”

The nighttime then brought a slew of genres that made even the most stalwart friend groups split up. Over at the Main Stage—which often seemed too great a distance to venture—80s rock band Dinosaur Jr. delivered a rather subpar set to sea of faithful fans. It may be the fault of the Main Stage with its placement of speakers; either you’re too close or way too far from the experience of immersion (see also, Chet Faker).

But no need to fret! Goldroom was there to pick up all the slack at The Trees, laying down the most dance-worthy beats that put the crowd in a proper state of frenzy, and it’s a good thing, because there were two musicians coming up that would be needing high-energy aficionados.

Atlanta-based hip-hop craze Run the Jewels proved to be one of the most unforgettable acts all weekend by catering their performance directly to the crowd, urging participation, and not to mention bringing on guest performers Zach de la Rocha of Rage Against the Machine and Travis Barker of Blink-182.

And then there was FlyLo. It’s really no surprise that the surprise DJ set—which wasn’t even a DJ set—from Flying Lotus would be a fan favorite, that is if you were able to get into the abyss that is The Arena. After last year’s debacle with the only indoor stage at FYF, where many, including yours truly, were turned away from the likes of Caribou and Todd Terje when the space was nearly empty, we hoped that the kinks would have been panned out. If you weren’t willing to wait in the snaking line outside for floor space, you could join flocks of people vying for seats. Unfortunately, many of us were still denied FlyLo by blocked off seating and overzealous security. But from what I heard from the outskirts and from the few lucky ones who made it within, he did not disappoint.

From then on, the hits kept on hitting. From the quirka-delic rock of !!!, who replaced Deerhunter last minute, to electro-god Shlohmo, FYF-goers were never left standing idling by, waiting for grooves to sweep them away. But really, there was one showstopper on Saturday night, and that was Bloc Party. If you had the good idea to check out what these British rockers had up their sleeve, then you left thinking you’re a genius. The beginning of their set was groovy enough, but it was really halfway in when they cued up their biggest hits from their 2005 album Silent Alarm that had the crowd completely bugging out. It’s hard to describe how much energy exuded from The Lawn when “Helicopter” echoed from the amps. These guys even made Purity Ring seem tame.

And then there was Sunday, which, unlike Saturday, was a complete emotional mess. Sunday was like a parent choosing a favorite child, and in this case, many children were left behind in the dust.

It all started with some great punk rockers. Both King Gizzard and the Lizard Wizard and Girlpool utilized their early set times wisely as they roused the hungover and reinvigorated the sleep-deprived from the day before.

But then Lower Dens, Andrew Jackson Jihad, Unknown Mortal Orchestra, and Neon Indian all decided to play on top of each other. If you chose wisely, you went to fan favorite AJJ or Neon Indian. I, unfortunately, did not. While I’ve seen UMO put on a good show in the past, their sound was overwashed with poor acoustics—not to mention that sun. It was hot and miserable.

And so, learning from that mistake, the rest of Sunday became about splitting sets in half in order to see as many gems as possible. The result:

- British singer-songwriter Laura Marling wooing an entire audience, making every girl, boy, man, and woman want to propose to her, and many did.

- Toro y Moi providing enough funk at The Main Stage to appease even the most square of listeners. This was one act that was hard to tear away from.

- Canadian chill rocker and FYF favorite Mac Demarco wooing an entire audience, making every girl, boy, man, and woman want to propose to him, and many did.

- And then there was Flume, who, despite the troubles of the Main Stage’s sound system, delivered a phenomenal electronic set, punctuated by an unexpected appearance by Lorde, who she just kind of danced alongside him.

If you ask me, the rest of the evening provided the best of FYF Fest. Despite rumors of disbandment last year, industrial hip-hop legends Death Grips have been gracious enough to continue on touring and thank goodness for it. When they hit the stage at The Trees, fans came in droves, hungry to get down. And they did. Ohhhhh they did.

The battle for best show of the weekend then comes down to two. As many expected, D’Angelo and The Vanguard killed it. The return of the R&B legend with his latest album Black Messaih in tow, was, in no form of hyperbole, an essential of the FYF experience. Him and his band of astoundingly talented musicians made each and every audience member a slave to the groove. You couldn’t be a curmudgeon, even if you wanted to.

It may have been the one and only Nicolas Jaar who turned the tides of FYF. Last year, his brief and rather genius collaborative effort Darkside amazed audiences with one of the most outrageous sets, which included a giant mirror/portal that transformed the arena into a spaceship. This time around, with his “DJ set,” he had the audience’s interest piqued with a three-minute ethereal prelude, and then set off into a wild range of avant-garde electronic mania. It was the type of moment where fans became fanatics. If you ever wanted to know what it looks like to be in a trance, look no further than the audience of one Nicolas Jaar.

And thus, we can conclude, FYF was a success. With few pitfalls and many major musical leaps for mankind, I think its safe to say the music fiends of LA will be satiated, at least for a little while. Until next year, FYF.