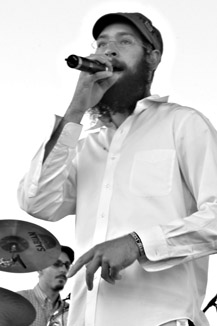 At first, many fans and critics touted Goldenvoice's lineup for this year's Coachella as being rather lackluster. But tickets for night two eventually sold-out and a total of over 100,000 people trekked to Indio for both days of the annual music festival in Indio.

If the desert heat doesn't get you all hot and bothered, running from the various stages and tents to check out the exact combination that you want to see from the list of over100 bands on the lineup will. While the weather on Saturday was milder than in years past, the action on all stages was anything but tame.

Taking us through three decades with tunes from all periods of its career, Depeche Mode's synth-pop dazzled the heat-stroked crowd as brightly as the stars shone in the sky. “Stripped,” “World in my Eyes,” “I Feel You,” “Enjoy the Silence” and “Personal Jesus” transported many a listener back to the 80s and 90s. The band also performed “Precious,” “Pain That I'm Used to” and “Suffer Well” from its latest release, Playing the Angel .

Vocalist David Gahan has still got it, prowling the stage with mic stand gripped in hand, he managed to make the section of people surrounding me fall into a collective swoon at his bare chest when he peeled off his leather vest.

Speaking of wardrobe choices, your favorite Scottish rockers were styled quite appropriately for the evening. Franz Ferdinand, decked out in cowboy style western apparel, fit right in with desert atmosphere. The group energetically tore through a set highlighted by crowd pleasers “Do You Want to” and of course, “Take Me Out.”

Right before that, the ambient soundscapes of Sigur Ros provided a calming soundtrack to a stunning sunset. Soaring vocals from singer Jónsi and fuzzy guitar tones lulled the crowd before senses become overstimulated by the noises created during the beating on guitar strings with a violin bow on “olsen olsen.”

Anyone who has gone to Coachella before knows exactly where to go if you aren't afraid of total and complete sensory overload – the Sahara Tent. For its first set in the U.S. in many years, French duo Daft Punk put on one hell of a show. And that is a total understatement. Presenting “Robot Rock” in both aural and visual forms, there was simply just too much to feast your eyes and ears on during songs like “Technologic” and “Around the World.”

Kanye West definitely succeeded in getting the crowd moving with all of the songs you expect him to play (“Slow Jamz,” Jesus Walks,” “Gold Digger,” etc.) and the showcasing of his own fancy footwork to the records his DJ happened to be spinning.

A stand-out performance of the day was given by Kentucky's My Morning Jacket. It was hard not to become fixated on the continuously flailing heads of long hair as the band gathered a large crowd at the Outdoor Theatre. Jim James' high, wobbly vocals are strangely comforting and pleasing to the ear during songs like “Gideon,” “Wordless Chorus” and “Mageetah.”

The auditory lovefest continued as Damian “Junior Gong” Marley took the stage with his band and rasta flag-waver person. A sea of heads bopped up and down to “There for You” and excitement bubbled through the crowd during his renditions of his father's “Could You Be Loved” and “Exodus” tunes.

The Eagles of Death Metal soared onto the scene next, complete with two drumkits set-up on the stage. Vocalist/guitarist Jesse “the Devil” Hughes was accompanied by Samantha Maloney as well as his childhood friend on drums, Josh Homme (Perhaps, you know this name from Queens of the Stone Age or Kyuss?). The band thundered through “I Want You so Hard (Boy's Bad News)” and a roaring cover of “Stuck in the Middle with You.”

Despite, really muffled sound problems, Clap Your Hands Say Yeah managed to pound out a solid set. Another notable of the day was singer-songwriter Imogen Heap who made the idea of just chilling out in the Gobi Tent seem so very welcome.

Twenty-four hours would pass and the Gobi Tent would be the setting for one of the most anticipated acts of the weekend, Gnarls Barkley. Danger Mouse and Cee-Lo did not disappoint. Dressed as the Tin Man and Cowardly Lion, respectively, from the Wizard of Oz , and joined by other band members costumed as the Wicked Witch of the East, the group put on a set that could be compared to none other at the festival.

The crowd danced to “Transformer,” “Smiley Face” and Gnarls' incredibly sizzling song of the moment, “Crazy.”

Although, their keyboard broke, the members of Phoenix (They're from Paris, France, not Arizona by the way.) put on an impressive set. Also quite good were Editors, Minus the Bear and yes, I'm admitting I enjoyed James “You're Beautiful” Blunt.

Matisyahu's rap and reggae infused beats had hipsters' hips shaking as did Bloc Party's frenetic stylings. But, now it's on to the real meat of the evening, beginning with a steaming hot plate of Yeah Yeah Yeahs. Tearing into “Cheated Hearts” from their recently released Show Your Bones CD, the trio mesmerized.

Karen O covered her face with a shimmering scarf at the beginning of “Gold Lion” before unmasking to reveal the crazy grin that s almost always plastered on her red lipstick smeared mouth. Everyone at the main stage was moving to “Phenomena” and “Y Control,” and shed a tear or twenty during “Maps,” the song that pretty much put them on the map.

Ever the diva, Madonna started almost 30 minutes late causing the huge crowd around the Sahara Tent to become increasingly ansy. All the built-up energy seemed to explode as the set began with “Hung Up.” Lady M performed only five other songs (“Get Together,” “I Love New York,” “Ray of Light,” “Let it Will be” and “Everybody”). Madonna made her festival debut in style and the crowd just ate it up.

Next, one-time Madonna collaborators, Massive Attack drew the masses to the Main Stage. The peaceful heartbeat-like murmurs of “Man Next Door,” “Inertia Creeps” and “Black Milk” set the perfect tone for the time of night. Cocteau Twins' Liz Frazier whispered the lyrics of “Teardrop” and all was serene.

Then, it was time for Tool. The first thing frontman Maynard Keenan uttered was, “Hey, hippies. It smells like patchouli” before hurling into “Stinkfist.” Keenan remained hidden in the shadows on stage for most of the set, inviting your eyes to partake of the feast of images flashing on the four big screens suspended above the stage.

Tool fans sang, jumped around, threw fists in the air to favorites, “46&2,” “Lateralus” and “Aenima.” All were eager to hear new songs from the band's just released 10,000 Days and were treated to several including “Vicarous” and “The Pot.” This Tool set alone was worth an entire weekend of burning in the sun, being covered in sweat that wasn't always yours while standing in a crowd and having to stand in line just to exit the venue.