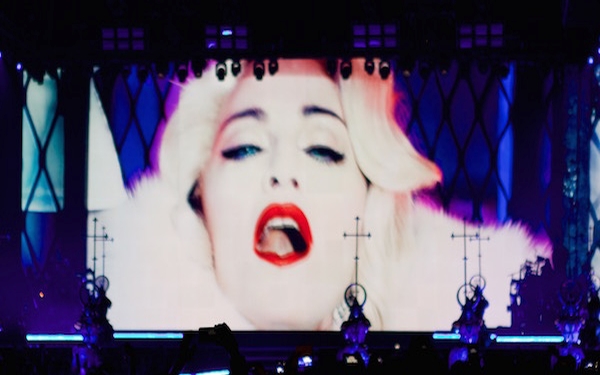 Take a dose of Cirque du Soleil acrobatics, Broadway-style choreography, costumes changes that would have made Cher applaud, mix with a dollop of sweet acoustic ukulele and fiery guitar and you have Madonna’s Rebel Heart tour, a musical feast for the senses. The Queen was back with a solid confidence and glow that exuded throughout her visually stunning and dramatic show. What else would you expect? Bitch, it’s Madonna!

Dropped from the sky in a gilded gold cage, Madonna began her set with “Iconic” as dancers dressed as Roman soldiers used a tilted stage to slide, plunge and creatively dance to the music.  A huge film screen was part of the backdrop, showing reincarnations of Madonna throughout the years. Singing early favorites such as “Burning Up,” and “Like A Virgin” along with current songs like “Devil Pray” and “Heartbreak City” from her latest CD Rebel Heart, each song’s dance routine and scenes played more like a Broadway show than a concert.

For “Body Shop," Madonna simulated sex with a hot mechanic, prancing on the hood of a vintage Chevy. As Madonna sang the playful “S.E.X," scantily clad dancers coupled and tripled with other dancers on brass beds, showing variations on sex with their spicy S&M moves. With Madonna’s LGBTQ and local WeHo fans representing in the crowd, it was no surprise that many sang and cheered throughout the show.

Sporting the body of a 23-year-old, Madonna performed “Like A Virgin” proving that talent and healthy living supersede age, which was also shown by her clear, pure vocals. During intimate acoustic moments such as the pop ballad “Secret," Madonna declared, “I feel like the luckiest girl in the world,” to her fans who have stayed true blue to her throughout the decades.  As a finale, the young "icon-in-the-making" Katy Perry rose from the stage, joining Madonna in singing "Unapologetic Bitch" as she was spanked on the bum and playfully flipped the bird to the crowd.