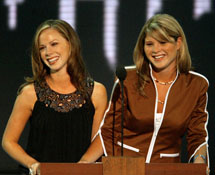 The Bush twins’ recent appearance at the Republican National Convention left some people laughing, some people cringing and lots of people talking.

The president’s daughters, introducing their dad, poked fun at former First Lady Barbara Bush (“Gammie, we love you dearly, but you’re just not very hip. She thinks ‘Sex and the City’ is something married people do but never talk about”); upped their parents’ hip quotient (“Our parents are actually kind of cool. They do know the difference between mono and Bono. When we tell them we’re going to see OutKast, they know it’s a band and not a bunch of misfits”); and countered John Kerry’s daughters’ story about their dad saving a pet hamster’s life (“We had a hamster too – let’s just say ours didn’t make it.”)

Reporter Heidi Stevens, 29, and pal Andrea Passalacqua, 27, came away from the speech with opposing reactions. Below is the e-mail exchange, slightly condensed, they shared the day after the telecast.

Heidi: Hey, Andrea, what did you make of the Bush twins last night?

Andrea: I was pretty impressed. They were confident, polished and engaging on a live national stage, which is no small feat for a couple of recent college grads. Their segment could have been an intermission, but instead it was a refreshing, must-see part of the show. What was your take?

Heidi: I thought it was pretty painful. It irritated me that that’s the face of young, college-educated women that the party wants to broadcast on prime-time. “Hee hee! We are unfazed by unemployment and raging wars! We just watch ‘Sex and the City’ and listen to OutKast!”

Andrea: I can see what you’re saying to an extent, but (the) telecast was the wrong forum for that. The twins don’t set policy and probably have had zero influence on it so far. They were there to humanize their father, and you don’t need to discuss stem cells, the Middle East or Social Security to accomplish that. Plus, their intelligence was evident even if their content lacked some substance.

Heidi: I definitely think their goal was to humanize their dad, but their speech left me knowing . . . what, exactly? He’s tough on hamsters? I don’t think they needed to weigh in on tax cuts or the war on terror, but I think if ever there was a time to put your hard-partying reputation aside and say something of substance, a political convention is it. Why not tell a story about the president as a role model, the first lady as a mentor, your grandmother as your childhood hero? Why not use your fame to grab young people and try to convince them your dad’s party is the one for them?

Andrea: I’m not saying the script was perfect. . . . “Jenna and I are really not very political”? Come on! I’m just arguing they did an excellent job with the material put in front of them, and that’s really all we can judge them on. The party’s main hope is that these strong young women count for something when it comes to those all-important female votes. And in their short time on the air, the twins proved they are self-assured, independent, and loving children; their parents have successfully launched them. Bush wanted to give voters a glimpse of this facet of his life, and his daughters’ message accomplished that. Their airtime was probably better used on light-hearted banter anyway – they need to build some credibility before anyone will really care what else they have to say.

Heidi: Good point. Maybe I’m directing my irritation in the wrong direction – they were just reading what was put in front of them. It just seems like a shame that an opportunity to showcase two young women with access to all the knowledge in the world was squandered in favor of an easily digested, cutesy back-and-forth. They became decoration instead of substance. As a young woman who has to work twice as hard to be taken half as seriously as her colleagues, I wish they were handed a speech that proved young plus female doesn’t equal airhead.

Am I being hypersensitive?

Andrea: No, I think you’re right in a lot of ways. But I didn’t really think they came off as airheads. The two of us just had different expectations of their appearance. If Arnold was accepting an Oscar, the Bush daughters were introducing the next nominees, as far as I was concerned. Even some of the most brilliant women I know escape with Sarah Jessica (Parker) and OutKast, after all; those statements didn’t necessarily represent their breadth of interests. So perhaps if the girls are looking to follow in Chelsea’s (Clinton) steps and get hired at McKinsey and Co., this wasn’t the most stunning display of their knowledge. It was still a decent debut though. . . . I’d invite them back for a second round of interviews.

Heidi: Yeah, a person should be able to go toe-to-toe on the issues during the day and veg out to “The Bachelor” at night, without being judged solely on one activity or the other. I just wonder if them giving what amounts to a wedding toast at a political convention makes it harder for us to be taken seriously when we do try to pipe up about something other than fashion or entertainment. Alas, it’s time to sign off and get some real work done.

Andrea: I can see what you’re saying, and that’s a concern for me too. But I don’t think the Bush daughters hurt our ability to be taken seriously: Barbara and Jenna are still young enough that no one would fault them even if they really didn’t have strong political views they were ready to articulate – when they do, people will be ready to listen. And their mother was equally poised and articulate in her speech ... while delving into some issues that are actually on the platform. Let’s face it, the Bush women could run the White House if George never came home from that softball game.