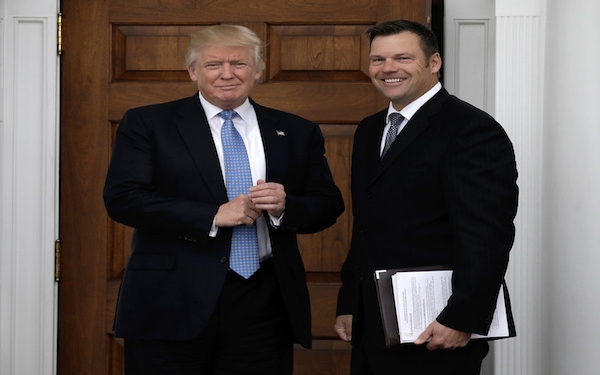 President Donald Trump, left, and Kris Kobach, the Kansas secretary of state, on November 20, 2016, at the clubhouse of Trump International Golf Club, in Bedminster Township, N.J.

A three-judge panel of the 9th U.S. Circuit Court of Appeals ruled that a Seattle federal judge’s earlier restraining order on the new policy should remain in effect while the judge further examines its legality.

The controversial travel moratorium signed Jan. 27 stirred chaos at airports and protests worldwide as at least 60,000 visas were canceled, including those held by students visiting families abroad and engineers working in the U.S.

“We hold that the Government has not shown a likelihood of success on the merits of its appeal, nor has it shown that failure to enter a stay would cause irreparable injury,” the panel of two Democratic appointees and a Republican unanimously decided in an unsigned opinion.

“We therefore deny (the government’s) emergency motion for a stay,” the court said.

U.S. District Judge James L. Robart issued a temporary restraining order blocking enforcement of the order last week after concluding that a challenge by the states of Washington and Minnesota was likely to succeed.

The Seattle-based judge, appointed by President George W. Bush, also concluded that halting the ban — at least for a while — would cause no undue harm to the country.

Administration lawyers have argued that the country could be at risk of a terrorist attack until heightened vetting measures for travelers from those countries are put into place.

In the first appellate court ruling on the controversial travel ban, the court rejected the Trump administration’s argument that the courts lacked the right to review the president’s executive order. “There is no precedent to support this claimed unreviewability, which runs contrary to the fundamental structure of our constitutional democracy,” the panel said.

“Indeed, federal courts routinely review the constitutionality of—and even invalidate—actions taken by the executive to promote national security, and have done so even in times of conflict,” the panel added.

The court said the states were likely to succeed in their due process claim, noting that the due process protections provided under the Constitution apply not only to citizens, but to all “aliens” in the country as well, as well as “certain aliens attempting to re-enter the United States after traveling abroad.”

The judges also said they took note of the “serious nature” of the states’ claim that the travel ban, because it targets Muslim-majority nations and provides exceptions for members of persecuted religious minorities, constitutes religious discrimination.

“We express no view as to any of the States’ other claims,” the court said.

Trump’s executive order, issued only seven days after the president took office, placed a 90-day block on admission of citizens from Iran, Iraq, Libya, Somalia, Sudan, Syria and Yemen, all of which administration officials say have links to terrorism.

It also included a 120-day ban on all refugee admissions, indefinite suspension of the admission of Syrian refugees and preference for refugees who are members of persecuted religious minorities.

Washington and Minnesota sued Trump, maintaining the order was hurting their businesses and disrupting their public universities.

“Today the U.S. Court of Appeals for the 9th Circuit not only upheld a federal court ruling that placed a temporary nationwide halt to President Trump’s Muslim ban, it also upheld long-treasured American values of the rule of law and liberty and equality for all, regardless of religion,” Farhana Khera, executive director of civil rights group Muslim Advocates, which has filed a brief in the case, said in a statement.

The Trump administration can appeal the decision directly to the U.S. Supreme Court, which has four Democratic appointees and four Republican appointees and may be unable to reach a majority decision. The seat of the late Justice Antonin Scalia remains vacant.

UC Irvine Law School Dean Erwin Chemerinsky said it was difficult to predict whether the Supreme Court would review the decision.

“They don’t want a 4-4 split, but they really like having the last word on high-profile case,” the constitutional law expert said.

Speaking at a White House event with U.S. sheriffs on Tuesday, Trump said he “could” take the travel ban case to the Supreme Court.

The restraining order prevents Trump’s ban from being implemented nationwide, but does not bind other circuit courts.

Dozens of federal judges around the country have ruled on other challenges to the travel ban, and an appeals court from another circuit could reach a different conclusion on an appeal.

If the Supreme Court decides not to review the 9th Circuit decision or can’t muster a majority vote, the ruling from the San Francisco court will remain in place while the Seattle judge further examines its legality.

The law requires appellate courts to be highly deferential to trial judges when examining a temporary restraining order.

To overturn one, an appeals court must find that that the judge made a clear and unreasonable decision or an “abuse of discretion.”

During the presidential campaign, Trump vowed he would make the country safer from terrorism by barring Muslims from other countries from entering.

But federal lawyers defending the ban said the seven countries targeted in the executive order were designated not because they were predominantly Muslim but because Congress and the Obama administration had linked them to terrorism.

The Trump administration also argued that the president could not be second-guessed by the courts on his executive action because as a matter of law he has authority over foreign relations and national security.

The 9th Circuit, which decides federal matters for nine Western states, is considered one of the more liberal circuit courts in the nation.

The Seattle case that led to the 9th Circuit review is among dozens of lawsuits going through federal district courts over the travel ban.

In Virginia, a Friday hearing was scheduled in front of a federal judge in a case brought by the state, which has asked for a preliminary injunction against the ban. There is also a hearing scheduled in late February in Brooklyn, where a federal judge handed the American Civil Liberties Union the first legal victory against the ban when she issued an emergency order to halt deportations of visa holders who had arrived in the U.S. but were denied entry.

New federal lawsuits are also still being filed, including one filed on Thursday in Washington, D.C., on behalf of several Iranian American organizations.