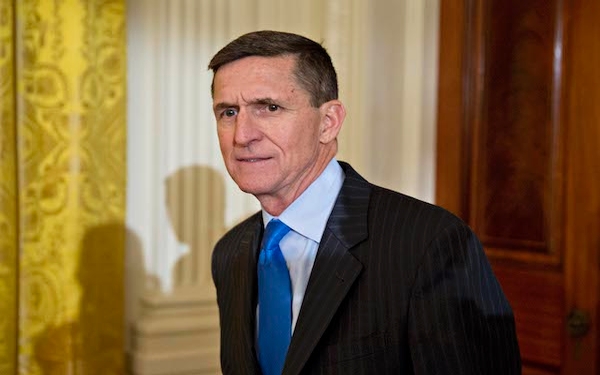 Michael Flynn resigned late Monday as President Donald Trump’s national security adviser, following mounting scrutiny over his conflicting accounts of contacts with a Russian diplomat and his admission that he had misled Vice President Mike Pence about the matter.

Flynn’s departure, which came after several days in which Trump conspicuously refused to publicly back him, marked another embarrassing setback for an administration just over three weeks old, on a subject that has for months given pause to both Democrats and Republicans — connections between Trump and Russia.

Kellogg was one of three candidates being considered to replace Flynn, White House officials said. The other two are retired Vice Adm. Bob Harward and retired Gen. David Petraeus, who was forced to resign as director of the CIA in 2012 while under fire for sharing sensitive information with his paramour. He pleaded guilty to one count of mishandling classified information and was fined and sentenced to probation.

Flynn’s downfall began with a series of contacts he had with Russian Ambassador Sergey Kislyak, which became the subject of news reports in January. Flynn and other administration officials, including Pence, initially denied the reports of multiple contacts between the two men. They then conceded that the two had spoken, but denied that Flynn and Kislyak had discussed sanctions the Obama administration had imposed in December after concluding Russia had attempted to interfere with the U.S. election. Such talks would have been highly inappropriate given that President Barack Obama was still setting U.S. foreign policy at the time.

“Unfortunately, because of the fast pace of events, I inadvertently briefed the vice president-elect and others with incomplete information regarding my phone calls with the Russian ambassador,” Flynn wrote. “I have sincerely apologized to the president and the vice president, and they have accepted my apology.”

No evidence has emerged that Trump directed Flynn to act or was even aware of what he was doing. But the resignation of Flynn is unlikely to put to rest questions about Trump’s own relationship with Russia and public admiration for its president, Vladimir Putin.

Flynn, who left the Obama administration in 2014 and later said he had become disenchanted with its strategy for fighting Islamic militancy, found a kindred spirit in Trump. His views closely aligned with Trump’s campaign attacks on Islam and calls to bar Muslims from immigrating to the U.S., and he became a close adviser during the election.

But Trump’s choice of Flynn as national security adviser, a key White House role, prompted concern among critics who saw Flynn’s views as too extreme and noted his own visit to Russia in 2015, where he sat next to Putin at a dinner for RT, the Russian propaganda network.

A new round of media reports in recent days refocused attention on Flynn’s contacts with Kislyak. Based on information from unnamed U.S. officials, The Washington Post disclosed that U.S. intelligence officials had a transcript of a call, recorded as part of routine monitoring of Kislyak, which contradicted Flynn’s account.

Aides to Flynn then backed off his earlier denials to say he “had no recollection of discussing sanctions,” but that “he couldn’t be certain that the topic never came up.”

Intelligence officials and others expressed incredulity that Flynn, a retired Army lieutenant general who ran the Defense Intelligence Agency under Obama, could have been unaware that Kislyak’s calls were routinely monitored.

Flynn would have risked violating U.S. law by discussing the sanctions before Trump took office. The Logan Act, which never been used to prosecute anyone, bars U.S. citizens from unauthorized interactions with foreign governments with an intent to influence government actions.

But it was Flynn’s recounting of his conversations to Pence that appeared to have proved fatal to his service in the administration. Pence said in a nationally televised interview just before inauguration that the timing of Flynn’s contacts with Kislyak were “strictly coincidental,” and did not include a discussion of the U.S. decision to expel Russian diplomats and other measures announced around the same time.

Trump was silent about Flynn and the latest allegations during a weekend trip to Mar-a-Lago, Trump’s Florida resort, with Japanese Prime Minister Shinzo Abe, where Flynn was often by the president’s side.

His resignation, given at about 10 p.m. EST Monday and announced by the White House an hour later, came at the end of a frenzied day of closed-door talks in the West Wing and mixed signals about Flynn’s fate.

But roughly an hour after that, press secretary Sean Spicer announced that Trump was “evaluating” Flynn. And in the evening, while Trump and Pence remained in the Oval Office after the swearing-in of new Treasury Secretary Steven Mnuchin, chief of staff Reince Priebus huddled with the White House counsel and senior aides to Pence.

In the meantime, the Post reported that last month, Sally Yates, who was acting attorney general at the time, had told Trump administration officials that Flynn may have misled them about calls and texts with Kislyak and could be susceptible to Russian blackmail.

Throughout the day, Trump’s Twitter account, his tool for impromptu screeds that can set the day’s news agenda, was ominously silent, save for canned statements.

Finally, Flynn’s dismissal was made public.

US News
Prolonged social distancing would curb virus, but at a high cost
696 views

US News
What we know about Mark Riddell, a test-taking whiz linked to college cheating scam
630 views

US News
California gunman was ex-Marine who might have suffered from PTSD, sheriff says
1,021 views