With Amoeba Records’ Hollywood location in limbo, the fate of music retail on Sunset wavers 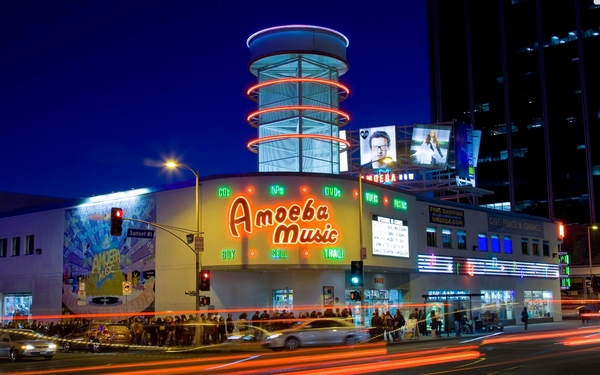 Last month, a shudder rumbled through the L.A. music world when news spread that Amoeba Music in Hollywood, the massive pop-culture retailer at the corner of Sunset and Cahuenga boulevards, might be forced to relocate.

The building’s owners, GPI Properties, unveiled plans to construct a 28-story tower on the spot, a move that, if approved, would dramatically reshape an already changing neighborhood.

If Amoeba is forced to move, it won’t be the first time that Sunset Boulevard has lost a major music retailer. But depending on where Amoeba lands, it could mark the first time in more than 75 years that the boulevard won’t be home to a music superstore.

Before Amoeba, West Hollywood’s Tower Records reigned supreme. Until it was shuttered in 2006, Tower served as the go-to spot for fans, artists and the music industry during the LP, cassette and CD eras.

Prior to Tower’s arrival in the early 1970s, another massive enterprise, Wallichs Music City, owned by one of the founders of Capitol Records, occupied the corner of Sunset Boulevard and Vine Street that now houses a Walgreens.

Beloved to earlier generations, Wallichs ran the retail landscape during the era of the 45 rpm record and the ascent of the LP. The shop featured private listening booths where buffs could sample the music before buying it.

At Wallichs, young entrepreneurs such as Herb Alpert, Simon Waronker, Phil Spector and Lou Adler could measure the real-time success of records on A&M, Liberty, Philles, Dunhill and Ode.

“We used to go there and count how many ‘Lonely Bull’ records were sold,” said Alpert.

The shop was so popular that a vocal group called the Pleasures recorded a song about it called “Music City.”

Wallichs’ closure in 1978, like Tower’s a decade ago, marked a turning point.

Contacted for an update on a possible move, Amoeba co-owner Jim Henderson declined to comment, other than to stress that “Amoeba has every intention of remaining in L.A.”

He cited the store’s statement on Facebook as the most complete update on its future at 6400 Sunset. It reads, in part, “Rest assured, we are NOT closing, but we are now in a position where we may have to change locations in the coming years.”

The statement adds that while Amoeba hopes to remain at its current location, it’s also looking at “several other spaces that could suit us well.”

Such turnover is inevitable. Just ask Matt Groening, who used to work at Licorice Pizza in West Hollywood. Or Axl Rose, who stocked racks at the same Tower Records where his future Guns N’ Roses bandmate Slash shoplifted.

Or Foo Fighters and Germs guitarist Pat Smear, who manned the counter at the SST Superstore. The early 1990s retailer was the outpost for the punk label founded by Black Flag. It was down the street from big-box music retailer Virgin.

Regardless of where Amoeba lands, Sunset will still have its share of vinyl-heavy boutique stores, most notably the metal hub Vacation Vinyl in Silver Lake and Permanent Records, which assumed control of the former Origami Records in Echo Park.

And for those wondering, the Tower Records building, which still stands, is likely way too small to house a future Amoeba.