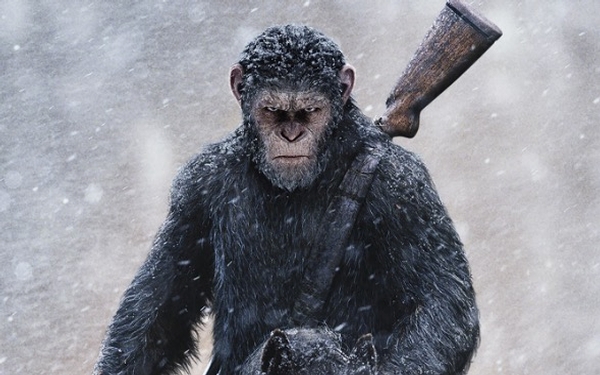 “War for the Planet of the Apes”; 3 Stars: The latest saga in the battle between man and beast steps up the examination of how much beast is in humans and how much being human is in the apes. This is all played out through a winner-take-all showdown between Caesar (Andy Serkis) and a man known only as The Colonel (Woody Harrelson).

After The Colonel launches the first attack, Caesar decides that a direct clash between the humans and the apes will be the only thing to resolve the conflict – one way or another. This leads to one of the best battle sequences of the rebooted series.

The action is strong but the strength of “War of the Planet of the Apes” is the same as the two previous films. Director Matt Reeves allows for enough time for all parties to discuss the fate of both the humans and apes through deep debates. This leads to several realizations about life that make “War” more than just another action movie.

“Annabelle: Creation”; 2 stars: The uneven film shows the origin of the demonic doll through the story of Samuel (Anthony LaPaglia) and Esther (Miranda Otto) Mullins. They are a God-fearing couple who live far away from civilization. Samuel has quite a reputation for his ability to make dolls, including one wide-eyed creation that’s creepy long before being taken over by an evil spirit. Both LaPaglia and Otto are superb actors when given a chance and this project comes up short with material for them.

“The Good Catholic”; 3 stars: Writer-director Paul Shoulberg finds the perfect balance of including enough religion to please those who like faith-based movies but not enough to turn away a general audience just looking for entertainment. Part of that comes from the story being so close to his heart.

“The Good Catholic” script is based on his deceased father, who was a priest in a small town when he fell in love with a practicing nun. This is the kind of sweet and endearing work that comes when you write what you know.

Father Daniel (Zachary Spicer) is searching for an answer because while he believes his decision to become a priest was right, there are things about his faith and commitment to God that remain elusive to him. That uncertainty is magnified when Jane (Wrenn Schmidt) walks into his confessional on a late Friday night.

“Personal Shopper”: Kristen Stewart plays a personal shopper who begins to worry about her own mortality.

“Bushwick”: War veteran and young woman must work together to protect themselves. Brittany Snow stars.

“Planetarium”: Two sisters traveling in Europe in the 1930s pass themselves off as psychics. Natalie Portman stars.

“An Inconvenient Sequel: Truth to Power”: Vice President Al Gore continues his efforts to educate and inspire the next generation of climate champions.

“The Emoji Movie”: Gene is different from the rest of the emoji because he can have multiple expressions.

“Teen Wolf: Season 6: Part 2”: Teen tries to deal with double life in this modern spin on the werewolf story.

AVAILABLE ON DIGITAL HD ON OCT. 24

“The Glass House”: Brie Larson stars in the film based on the memoir written by Jeannette Walls. Will be released on DVD and Blu-ray Nov. 7.

“Atomic Blonde”: Spy thriller that unfolds in late 1989 as the Berlin Wall is finally taken down. Available on DVD and Blu-ray Nov. 14.