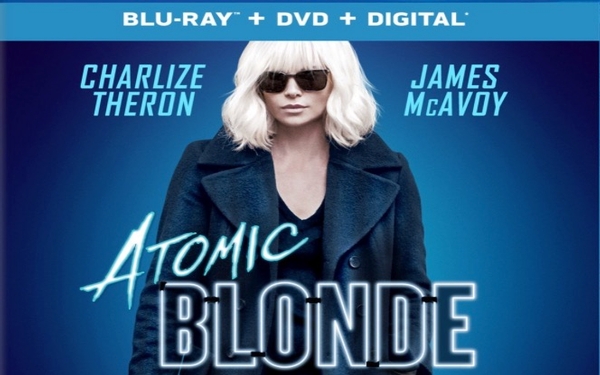 The new DVD release “Atomic Blonde” offers a look back at the world of spies during the time of President Ronald Reagan. The Charlize Theron film is among new releases for Nov. 14.

“Atomic Blonde”; 2 stars: Director David Leitch’s “Atomic Blonde” strives to be a mysterious Reagan-age spy drama that has a 21st century feel because it has been infused with the aggressively excessive violence so pronounced in the world of graphic novels. The script by Kurt Johnstad is based on the graphic novel “The Coldest City,” by Antony Johnston.

Charlize Theron’s good, but she can’t help the script that’s full of predictable twists and a story where the majority of the characters look to come from the “Make Your Own Spy” paper doll set. James McAvoy’s bad boy act falls flat and the other spies offer the same bureaucratic elements that have been used in other spy stories.

Even with a remarkable performance by Oscar-winning Charlize Theron, none of the parts connect strongly enough to make this a project worthy of launching a franchise. It’s got enough fun moments to be entertaining but never delivers the mushroom cloud of excitement the name would suggest.

“In This Corner of the World”; 4 stars: The film captures an infinitely human story in a beautifully animated tale of a young woman who grows up in Japan under the specter of World War II. The production from director/writer Sunao Katabuchi (“Princess Arte”) comes across with the kind of brutal honesty not always associated with animated movies and while still being able to take the visual liberties that come with scenes that are hand drawn.

Animation is one of the greatest art forms in human history as it is only limited by imagination. When artists like Katabuchi dare to share the images they have inside them, the result is a production that has a message as big as the universe and as small as one young girl.

This way of looking at war works because while it’s an animated tale set in a time of conflict, it’s a powerful reminder of how even those who don’t serve are all part of the tales of war.

“24: Legacy”; 2.5 stars: The real test in this FOX series for star Corey Hawkins is what to do when following a world-saving hero. For nine seasons of “24,” Jack Bauer (Kiefer Sutherland) was able to save the world from terrorists, stop assassinations, kill hundreds of bad guys and spend time in a foreign prison with not so much as one bathroom break or meal. It was that video-game toughness that kept the series about a single day’s events on the air.

Hawkins tries, but his character is no Jack Bauer, and that leaves this effort flat. It’s also a cheat that unlike the seasons where Bauer was saving the world, this season doesn’t cover a 24-hour period but includes only 13 episodes.

“Wind River”: Rookie FBI agent (Elizabeth Olsen) teams with a game tracker to investigate the killing of a local girl on a remote reservation.

“Amityville: The Awakening”: Mother and her three children move into the house without knowing what happened in the past.

“The Paul Naschy Collection II”: The five films in the set include “Hunchback of the Morgue.”

“The Nut Job 2: Nutty by Nature”: Surly and his friends must return to the park after being forced to leave the nut store.

“Thanks for the Memories: The Bob Hope Specials Deluxe Collection”: The 19 DVDs feature more than 37 hours of specials including 20 that have not been seen since their original broadcast.

“Whose Streets?”: Documentary that looks at the aftermath of the shooting death of Michael Brown.

“D.C. Follies: The Complete Series”: Set includes all 44 episodes of the 1980s comedy starring Fred Willard as the bartender where the clientele is made up of puppet caricatures of the biggest names in show biz and politics.

“Doctor Who: The Complete Tenth Season”: The third and final series with Peter Capaldi as the Twelfth incarnation of the time traveler.

“Aquarius”: Woman must battle to stay in the home she loves. Sonia Braga stars.

“Mariah Carey’s All I Want for Christmas”: Animated tale that includes the music of Mariah Carey.

“The Incredible Shrinking Woman”: Lily Tomlin stars in this 1981 tale of a woman who keeps getting smaller.