A brief history of Donald Trump’s arguments with music stars 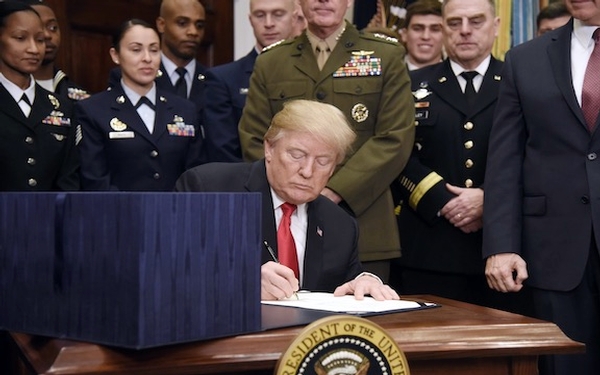 “Somebody please inform Jay-Z that because of my policies, Black Unemployment has just been reported to be at the LOWEST RATE EVER RECORDED!” Trump wrote on Twitter.

HOV is hardly the first hip-hop artist to face Trump’s wrath; in fact, the president has been quarreling with big-name artists since before he decided to dabble in politics.

Take a look back at some of the president’s pettiest public disses.

Trump and Snoop Dogg’s relationship wasn’t always ruff — in fact, the rapper appeared on a 2007 episode of “The Apprentice” and took part in Trump’s 2011 Comedy Central roast.

“Donald’s saying he wants to run for president and move into the White House. Why not? It wouldn’t be the first time you’ve pushed a black family out of their home,” Snoop said at the roast.

The relationship soured after Snoop Dogg backed Hillary Clinton in the 2016 presidential election, and it reached its climax in March, when the rapper released a music video for his track “Lavender” that featured him aiming a toy pistol at a clown-faced character named Ronald Klump.

Trump quickly hit back — on Twitter, of course — writing, “Can you imagine what the outcry would be if @SnoopDogg, failing career and all, had aimed and fired the gun at President Obama? Jail time!”

Like Diet Coke, Trump has shown an obsession with Mac Miller and his 2011 track “Donald Trump.”

Though Miller released the track as nothing more than a shout-out to Trump and his wealth, The Donald became fixated on the tune, tweeting dozens of times about the music video’s view count and his take that he deserved royalties.

Miller even earned himself a Trump Twitter nickname — Little Mac Miller — as Trump’s tweets became more and more aggressive and he threatened to sue.

“Little @MacMiller, I’m now going to teach you a big boy lesson about lawsuits and finance. You ungrateful dog!” he wrote. “Little @MacMiller — I have more hair than you do and there’s a slight age difference.”

Unsurprisingly, Miller isn’t crazy about the man who told him to “kiss my a —” on social media — during Trump’s 2016 campaign, Miller called him “an egomaniacal, attention-thirsty, psychopathic, power-hungry, delusional waste of skin and bones.”

Trump’s issues with JAY-Z are a family affair — he’s also got it out for the rapper’s wife, Beyoncé.

Back in 2013, Trump expressed his disapproval of Beyoncé’s Super Bowl halftime show during a call to “The Howard Stern Show.”

“There’s been no mention of it (in the press). So, obviously, it must not have been so bad. She gets a pass.”

Trump also seemed to take issue with the fact that both Beyoncé and Jay-Z were vocal supporters of Clinton.

“Beyoncé and Jay-Z, I like them. I get bigger crowds than they do. It’s true. I get far bigger crowds,” he told a rally in North Carolina.

Eminem sure doesn’t love the way Trump lies — or anything else about him, for that matter.

“I (hesitate) to say (I have) hatred in my heart for him, but it’s serious contempt. I do not like the guy,” the rapper told Billboard last week.

The “Lose Yourself” rapper has made his disdain for Trump well known; in October, he blasted the president in a freestyle rap at the BET Awards, tearing into his attacks on the NFL and his poor response to Puerto Rico.

Curiously, Trump has yet to take public aim at Eminem for his many insults.

Activist DeRay Mckesson and others believe race contributed to Trump lashing out at JAY-Z but ignoring Eminem’s attacks.

“I wonder why Trump has never responded to Eminem’s comments. I mean, I actually know why just like everyone else does,” Mckesson wrote on Twitter Sunday.