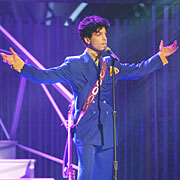 My first thought upon seeing Prince take the stage was that he is a very tiny man. But once he started to play, he proved to be larger than life.

Prince started the show with a cut from his new album Musicology, before launching into a melody of fan favorites. Confetti fell from the ceiling by the third song, signaling that it was going to be a party all night long. His band was right behind him playing up to par.

The show’s highlight was Prince’s drummer, who twirled his drumsticks like batons. The fun continued when Prince played an acoustic set by himself, with one of the many guitars he used that night. Throughout the show, Prince danced, strutted, made jokes and commanded the audience.

After Prince left the stage, band in tow, the audience gave a five-minute standing ovation before the funk master returned in a blaze of smoke and purple light for his encore.

From singing "Musicology" to "Purple Rain," the night belonged to one man. Prince proved he is not only royal in name but also reigns for his electrifying performances.