What a long, strange trip it's been for UCLA 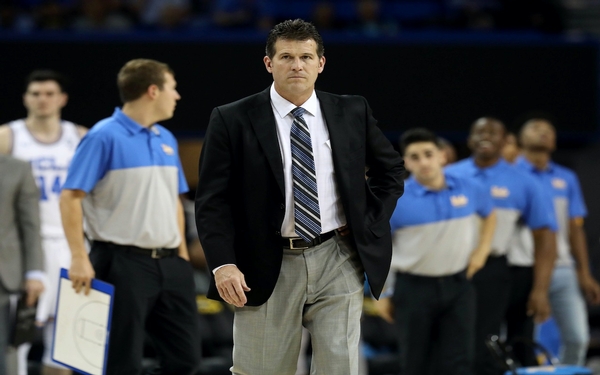 Steve Alford was watching game footage in a hotel ballroom in China, preparing for a season opener only a few days away, when everything changed.

The UCLA men’s basketball coach was informed that a few players had been spotted on surveillance cameras stealing items from a mall near the hotel where the team was staying. Authorities were questioning players.

The jolting development touched off a mad four-month scramble that involved more than the suspension of the three UCLA players who admitted shoplifting. There was a high-profile defection by one of them, LiAngelo Ball, following tweets from President Donald Trump; a travel schedule featuring roughly 23,500 air miles flown for nonconference games; the cancellation of a home game because of wildfires; a three-game losing streak and a last-ditch effort to make the NCAA Tournament.

Nothing has come easy for the Bruins, including their rushed travel arrangements after learning Sunday that they were one of the last four teams selected into the field of 68. UCLA was saddled with an additional game roughly 48 hours later just to make it into the main draw.

“I gotta get done with you all,” Alford told reporters Sunday afternoon, “so I can get to work.”

It’s foreign territory for the Bruins, who have won 11 national championships and will be making their 49th NCAA tournament appearance but never have had to win a game to reach the first round.

“I feel like it’s a tournament game,” point guard Aaron Holiday said Monday. “And it doesn’t matter if it’s the ‘first four’ … we’re going out to play and win a championship.”

If UCLA beats the Bonnies, it will hop on another plane to Dallas, where sixth-seeded Florida will await on Thursday. The Gators have continually produced March sadness in Westwood, knocking the Bruins out of four NCAA tournaments since 2006.

First the Bruins must win a potentially epic battle of the backcourts. Holiday, one of the nation’s top point guards who recently scored 34 points in consecutive games, will have to contend with St. Bonaventure guards Jaylen Adams (19.8 points per game) and Matt Mobley (18.5). Unfortunately for UCLA, Holiday can’t defend them both simultaneously.

The Bruins had expected to feature even more length and athleticism before Ball and forwards Cody Riley and Jalen Hill went on the November shoplifting spree. The trio publicly apologized upon returning to Los Angeles while thanking Trump, who tweeted that the players were facing 10 years in a Chinese prison had he not intervened.

UCLA officials announced an indefinite suspension of the players — later made a seasonlong ban — prompting Ball to withdraw from school a few weeks later so he could sign with a team in Lithuania.

Meanwhile the Bruins played on, making stops in Kansas City, Mo.; Ann Arbor, Mich.; and New Orleans. Combined with the trip to China, players had logged nearly enough miles for premier airline status by the end of December.

A rare breather came early that month when wildfires that threatened the UCLA campus and filled the air with ash forced the cancellation of a home game against Montana.

The elimination of a nonconference game against a team that eventually made the NCAA tournament — and a chance for an accompanying RPI boost had UCLA prevailed — looked like it might hurt the Bruins’ chances. UCLA had not defeated anyone of note until knocking off then-No. 7 Kentucky in late December, but it provided only one line on an otherwise barren postseason resume.

The Bruins temporarily lost Welsh two weeks later when he took an elbow to the nose during a double-overtime loss against Stanford, forcing him to wear a protective mask for more than a month. Holiday could have used an oxygen mask, playing nearly every minute of every game once his team reached Pac-12 play.

UCLA’s NCAA tournament hopes appeared shaky when it lost three straight games in January. But the Bruins probably clinched an invitation when they opened March with a victory over USC and followed it with a triumph over Stanford in the Pac-12 tournament.

Alford acknowledged his surprise upon learning his team would have to open the NCAA tournament on Tuesday as opposed to Thursday or Friday, though it beat a lot of the alternatives.

“Four months ago we’re sitting in China and not knowing what’s going on and what’s happening,” Alford said Monday. “And now we’re in the NCAA tournament. And that’s a very good accomplishment.”