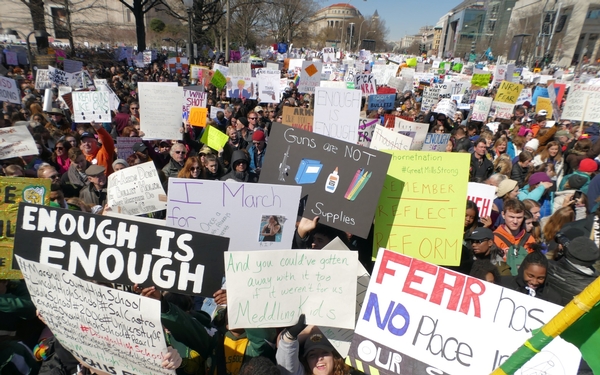 Tears rolled down Emma Gonzalez’s face as she stood in silence.

For 6 minutes and 20 seconds — the time it took for a killer to rampage through Marjory Stoneman Douglas High School in Parkland, Fla., and kill 17 last month — Emma held the attention of hundreds of thousands at the March for Our Lives in Washington — mostly by standing quietly, a piercing figure with close-cropped hair in a t-shirt, Army green jacket and torn jeans.

She wasn’t the only one fighting back tears among those in a crowd that stretched for blocks, who watched her projection on giant screens.

Emma, 18, was among several students from the Florida high school to take the podium at the Washington event, one of more than 800 rallies to call for an end to gun violence. People marched in New York, Chicago, Las Vegas, New Orleans, Minneapolis, London, Paris and Sydney.

Thousands marched in liberal Los Angeles, closing off the downtown core for hours. More than 120 marched in Victorville, in a high desert region more associated with conservative values. In each place, marchers demanded that lawmakers end the easy access to rapid-fire guns and take action against the everyday violence that plagues urban communities.

“Welcome to the revolution,” said one of the Parkland student-organizers, Cameron Kasky, in a speech aimed squarely at members of Congress. “We are the change … . Represent us or get out.”

Older participants included ex-Beatle Paul McCartney, who attended the March for Our Lives in New York as a way to honor bandmate John Lennon. McCartney, wearing a “We Can End Gun Violence” T-shirt, told CNN, “One of my best friends was killed by gun violence right around here, so it’s important to me.”

Lennon was shot and killed Dec. 8, 1980, outside his New York apartment.

Although celebrities marched, performed and donated to make the event impossible to ignore, they did not divert the focus from student speakers.

For a few minutes, the most powerful message was silence.

“Six minutes, and about 20 seconds,” Emma began. “In a little over six minutes, 17 of our friends were taken from us, 15 more were injured, and everyone, absolutely everyone in the Douglas community was forever altered. Everyone who was there understands. Everyone who has been touched by the cold grip of gun violence understands.”

The simple ferocity of Emma’s rhetoric has become familiar to those who’ve watched Parkland students move from typical high schoolers to tragic victims to public figures with attitude. She called out each of the fallen.

“My friend Carmen would never complain to me about piano practice. Aaron Feis would never call Kyra “Miss Sunshine,” Alex Schachter would never walk into school with his brother.”

And then she fell silent for more than four minutes — military erect, breathing forcefully, blinking through tears — till an alarm sounded with two sets of three beeps.

“Since the time that I came out here, it has been six minutes and 20 seconds,” she said. “The shooter has ceased shooting, and will soon abandon his rifle, blend in with the students as they escape, and walk free for an hour before arrest. Fight for your lives before it’s someone else’s job.”

The young activists and their supporters have revived a national debate over gun control, even pushing a pro-gun rights Florida legislature to take incremental steps on restrictions that would have seemed impossible a few months ago.

They’ve vowed to push for more — and one goal of Saturday’s event was to take their cause to a Republican administration and a Republican-majority Congress that has aligned closely with the gun advocacy of the National Rifle Association.

Although public opinion polls have long found majority support for gun-control measures — and recently found that support growing — many Americans remain adamantly protective of their right to own and use guns. For the most post, they chose to lie low on Saturday, although they gathered for scattered counter-protests.

About a dozen pro-Trump, pro-gun demonstrators rallied in front of Los Angeles police headquarters around noon, facing off against those seeking stronger gun control measures. They waved American flags and held signs reading “Ban Jihad not Guns” and “Guns will ensure our freedom.”

“How long have you been pro-mass shooter?” one man shouted at the small group.

“All lives matter!” a pro-gun protester shouted back, alluding to the Black Lives Matter movement, which has focused on controversial police shootings of blacks.

“My best friend is black!” said another of the gun-rights supporters.

In the thick of the march on Broadway, a group of teenagers that included Myles Pincus, 15, carried a long banner, decorated with red handprints, that read, “NRA has blood on its hands.”

Pincus, a student at Fusion Academy, urged people not to conflate mental health and gun violence.

“This is not a mental health issue,” he said. “This is a gun issue, period.”

Many teenagers said they looked forward to turning 18, when they could vote.

California election officials staffed a booth where adults could register, and 16- and 17-year-olds could pre-register, allowing them to vote as soon as they turn 18.

Giselle Jimenez, 17, a Hamilton High School student, held a sign reading, “Silly me, I didn’t know that not wanting kids to be slaughtered by assault rifles was being political.”

“A school shooting could happen anywhere,” Jiminez said. “The next victims could be me, my sister, any one of my friends.”

Sheva Gross, a child development professor at the University of California, Los Angeles, came to the march with daughters Talia, 8, and Flora, 11. Gross’s sign read: “I’m so mad, I can’t even think of a slogan.”

Flora said that she and her sister have gone through lockdown drills at their Culver City, Calif., elementary school that make them nervous.

“To not come home again, like, ever — it’s overwhelming,” Flora said.

In response to the moment, President Donald Trump on Friday announced plans for a ban on “bump stocks,” the devices used by a lone gunman in a Las Vegas shooting spree last October that killed 58. Bump stocks turn semiautomatic weapons into de facto machine guns.

Neither Trump nor Congress has acted on the students’ demands to ban assault weapons and high-capacity magazines. Trump and lawmakers left Washington on Friday, as marchers converged from all over the nation.

Trump, for one, was nowhere within earshot, having spent Saturday at his golf club in West Palm Beach, Fla.

Scores of people lined his motorcade’s usual path, which has been well-traveled by the president as he shuttles between his Mar-a-Lago estate and the Trump International Golf Club during weekend visits. They held signs excoriating the NRA and supporting an assault weapons ban.

But returning to Mar-a-Lago from the golf club on Saturday afternoon, Trump’s motorcade took a longer route than usual, crossing a different bridge into Palm Beach and then driving down Ocean Boulevard.

The White House did not respond to a question about the reason for the detour.

“This is a movement,” said Delaney Tarr, another Stoneman Douglas student, and it will not stop until Congress passes laws that “keep weapons of war out of the hands of civilians.”

If no assault weapons ban is passed, “we will vote them out,” she said.

The crowd responded with a more chants of “Vote them out!”

The speakers in Washington included Manual Arts High School student Edna Chavez, who witnessed the murder of her brother outside their South Los Angeles home. In an interview, she said she wanted marchers to remember that gun violence isn’t just about the terrifying but rare tragedy of a shooter who invades a campus. Entire neighborhoods, she said, are traumatized by pervasive violence that unfolds daily.

She said she remembered seeing the “sunset going down on South Central” and hearing the “pops, thinking they’re fireworks.”

“Ricardo was his name,” Edna said, asking the crowd to say his name. “Ricardo! Ricardo!” the crowd chanted in unison.

“I lost more than my brother that day. I lost my hero,” she said.

“He has an ‘A’ rating from the NRA and will never be an advocate for tougher gun laws,” Louise Olivier, 16, a junior at Benjamin Franklin High School, said as she held a sign assailing the Republican. “He almost died from a gunshot wound and still refuses to do anything.”

Olivia Keefe, 17, a classmate of Louise’s, said gun control legislation should not be a partisan issue. “This is not about Democrats or Republicans at all. … This is about common sense,” she said. “We need laws so a guy doesn’t have the chance to go on to a baseball field and start shooting.”

In Las Vegas, Stephanie Dobyns, a survivor of the mass shooting last fall, spoke at a March for Our Lives rally at City Hall. She described how she went to buy a bulletproof vest from a store in Texas, and explained to the sales clerk that she wanted it to protect her while she spoke at the gun-control march.

“Do you know what he said?” Dobyns asked.

“What did he say?” a lone voice yelled from the crowd. She paused again.

“He said he didn’t want his vest being used by anyone participating in that rally.”

The chorus of boos was deafening and long.

(Livingston of the Los Angeles Times reported from Los Angeles, Savage of the Tribune Washington Bureau from Washington and Montero of The Times from Las Vegas. Times staff writer Kurtis Lee in New Orleans contributed to this report.)