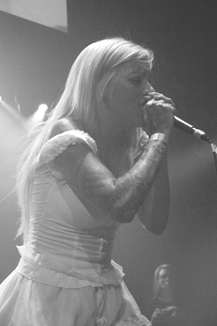 Girls be damned, what has really gone wild are the Goats, at least that was the case on June 17 at the Keyclub. Sponsored by the Evil Threads Clothing company and Jäegermeister, Goats Gone Wild III was a night of booze, babes, bands and blasting noise at ear-rupturing levels – the essence of rock 'n' roll.

Ears were bleeding early on from the brutal electronic/hardcore abrasiveness and blistering, spine-shattering pace of opening bands Sixstitch and Devolved. After the crowd was warmed up and nearly vaporized by the openers, things got into full swing when Extreme Videos adult star, Lizzy Borden graced the stage to help the night's MC give away some free swag courtesy of sponsor, Evil Threads. Between nearly exposed breasts, cheering and onstage spankings, free clothes were flying into the crowd, raising spirits and keeping the blood pumping until the next band arrived.

Then Ankla took the stage and former Puya guitarist, Ramon Ortiz, led the band into a set of his trademark Latin metalcore. Using traditional claves, interspersed with gutsy straightforward metal, Ankla (“anchor” in Spanish), provided the rhythms for moving bodies. And in the packed Keyclub, there must have been some contact more apropos to Miss Borden's line of work.

When Ankla departed, the stage became property of Hollywood's own, In This Moment. Fronted by vocalist, Maria Brink, whose burning, demonic screams and glass-smooth siren singing bellowed hotter than a blacksmith's fire. The Keyclub couldn't help but be a bit scorched by her performance and it didn't hurt that she's really hot as well and for the mostly-male audience, it translated into raised prongs and fervent shouting.

After the Moment had passed, Borden returned to the stage to hand out more free gear and this time to cavort with a female friend of hers in activities not fit for discussion. The crowd and the stage stayed warm, but when L.A.'s Flatline took the stage things seemed to slow down a bit.

The low light of the night, Flatline's derivative compositions and unvaried vocal style left the crowd wanting. And to make matters worse, a bad sound mix left all in attendance wondering just what they were listening to that sounded so bad.

But when the time finally came for Rikets to appear, the crowd had thinned a bit, but not enough to dissuade the band members from giving the show every ounce of themselves. The large stage of the Keyclub provided ample room for the band to remain animated as well as the S&M bondage/domination act that was going on stage right between three actors.

A man and a woman in classic bondage gear were delivering a sound mock-punishment to an of-age catholic school girl throughout the band's time on stage. Rikets tore through their set synth-tinged nü-metal with ferocity and singer Scott Rose delivered with a screaming voice handed to him directly from the devil.

The end of the night came without a huge bang, however, as Rikets left the stage, a brief reappearance by Lizzy Borden taunted the remaining audience, but after a few moments of her silence and inaction, the lights came up and the hopes went down.
Article posted on 6/26/2006
This article has been viewed 1431 times.