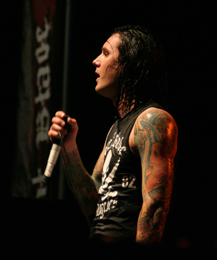 For all that's laughably ridiculous about hardcore and death metal, sometimes, you don't really get the full experience unless you're getting yourself as dirty as one of the bands on stage that hasn't showered in a week straight. Moreover, it's a proven fact that the louder a band is, the closer you need to be to the stage to actually enjoy their set because some bands just were not meant to be heard from balcony seats.

GWAR on the other hand, loud as they may be, is the exception to this rule. Even if you came late to the show, it was plain to see GWAR had marked its territory by the numerous bright red concert-goers who surely didn't get that way because of sunburn. See GWAR once to say you've been, [;]be a little frightened, have a few laughs and be a little disappointed that apparently the band has some kind of following. After that, you'll surely have met your lifetime quota.

Cannibal Corpse followed GWAR, proving to be no less aurally offensive, except without all the showy gimmicks for comedic effect. And by “offensive,” I actually don't mean songs like “Fucked with a Knife” specifically (though the band does give Shakespeare and Thoreau a run for their money with poetic prose. By offensive, I mean that if you're going to write a song about vaginally maiming your girl, at least back it up with decent musicianship. Jeez.

Luckily, In Flames took the stage next, proving that not all the bands to play this year's tour were total jokes. Equal parts melody and shredding, the Swedish fivesome showed up more than a few of its American contemporaries with solid musicianship and proved to be one of, if not the most visually engaging band to perform at the show.

Just to make sure the foreigners didn't completely steal the show, As I Lay Dying brought its signature commanding stage presence and showed that, even despite the greater separation between the group and its audience, it is one of precious few hard bands that doesn't lose anything in the translation to large venues. As frontman Tim Lambesis bounded from one end of the stage to the other, each of his bandmates proved to be equally as dynamic, displaying their own unique styles.

Maybe it's not the same as seeing them in a tiny club where you're more likely to get a concussion, but something says that these guys are only headed for bigger stages right now.
Article posted on 8/22/2006
This article has been viewed 1119 times.