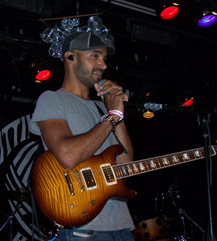 Incubus and the Roots have heavy competition brewing in the streets of Hollywood. Ben Kenney, a musician who has proven to be pretty badass on both the bass and guitar, has also been hooking up with fellow band mate DJ Kilmore.

But don't let these words mislead you. The two Incubus members aren't leaving the band. On the contrary, they're making passionate music on the side, and they brought a new batch of beats to the Knitting Factory for the second time since last year. Kenney (joined by Ashley Mendel on guitar and Sekou Lumumba on drums) and Kilmore played separate sets, while the Smyrk opened the show.

It's always impressive to see an opening band do a show in Los Angeles without getting cussed off stage. The lead singer started the show by exchanging jokes with his loyal fans with a voice so smooth it probably brings tears to his mother's eyes.

But for those that weren't feeling the Smyrk's soulful and melodic rock vibe, there was good news: its set was nice and short. The band chose about five of its best songs instead of playing its entire collection – a move that can ultimately drive the crowd into a violent rage.

Before you knew it, the Smyrk disappeared and two turntables and a laptop computer took its place. No announcement was needed. Everyone knew DJ Kilmore was getting ready to take the stage.

The concert crew continued to roll out a bunch of high-tech gadgets – equipment only recognized by the eye of a DJ connoisseur. Kilmore was shy on the mic, but eager to tell the crowd the history behind the music he was about to spin. “Everything you hear tonight is gonna be stuff that I made or [stuff] that I had a little help from my friends making,” he said. “You're not gonna know anything at all!”

One song he played was just created last week. He showed off his own versions of some of his favorite genres like drum 'n' bass, and when he needed to take a break from the turntables, he threw on “Smokin' Da Herb” from When Incubus Attacks, Vol.1. The DJ-turned-beatmaker even played two versions of one song, and later ended his set with a remix of Incubus' platinum hit “Pardon Me” featuring the addition of a live guitar played by Ashley Mendel.

That wasn't Mendel's last time onstage, either. In fact, when Kenney stepped out wearing pink Vision sneakers, Mendel was right behind him. In “423,” Kenney and Mendel set a slow, heavy pace on their guitars and Lumumba came crashing in on the chorus, picking up the pace with his cymbals.

The song “Girl” from the soundtrack of There's Something About Mary , romanced all the ladies in the crowd. Lumumba kicked off the melody with a sweet little drum solo and the female members of the audience started squealing before Kenney finished singing the first line, “Hey Ma, I got a girl ... She's everything in my world.”

But, it was almost nothing but new music to follow all night long. Anyone looking to check out the secret tracks unleashed at the Knitting Factory can visit MySpace.com/Thesmyrk, MySpace.com/Benkenney and MySpace.com/Djkilmoremusic for full audio downloads.
Article posted on 8/28/2006
This article has been viewed 2063 times.