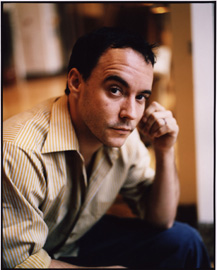 It's considered an honor to be asked to share your talent with the seasonal crowd at the Bowl since it only hosts shows in the summer, not year round. As this summer ends, the Bowl welcomed a new face to its stage, but not to our ears: the Dave Matthews Band, with special guests, Robert Randolph and the Family Band.

The first comment Matthews made when he took the stage referred to his excitement at playing the Bowl and playing in Hollywood. When a band is excited to play a show and doesn't just chalk it up to another day on tour, you know you're in for a treat.

The set opened with tracks from the group's first major release, Under the Table and Dreaming and then slid into favorites like “Crash,” “Pig” and appropriately for Hollywood, “Dancing Nancies.” The clarity of the music pouring off the stage mixed with the light show overwhelming the audience's eyes was just one stellar aspect of the night.

The opening act wasn't just a throwaway like you find at many other shows these days. In fact, seeing the Family Band on stage was a treat – the perfect mixture of funk and blues to start the night. Randolph has been around for a while, but recently, his band has gained some much overdue attention. His songs are about real life and having fun and there wasn't a single person sitting still during his whole set.

When you go to the Bowl you expect great sound and sights, but the important thing is the headliner's performance. DMB was no exception to the rule. From song to song the music never stopped. Each tune was bridged by a mini jam featuring one of the many talented artists from the band's line up.

Other than Matthews' intense voice, the combination of Carter Beauford's drums and Boyd Tinsley's violin were uniquely refreshing. Mixed with the bass from Stefan Lessard and the horn section with original band member LeRoi Moore on sax and new trumpet player Rashawn Ross from SoulLive, it was an assortment of talent and beauty that I wish I could hear every night.

Usually at a DMB show you'll hear a few comments from Matthews to the crowd consisting of mumbles and “Thank Yous.” Apparently his excitement got the best of him because he couldn't stop talking about how giddy he was to play Hollywood.

It's kind of hard to imagine that a band this popular had never played this city of ours before. They've done Dodger Stadium and even the Home Depot Center, but never Tinsel Town. Seeing the excitement of the band made it all a little more special of a night because we got to share it with them
Article posted on 9/5/2006
This article has been viewed 1136 times.