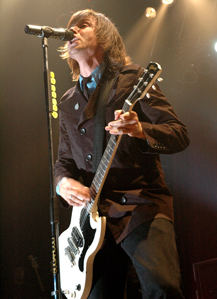 Hype is a fickle thing, but nevertheless, people make associations as to what's legit and what's not from it. What's funny, though, is that sometimes the real thing is totally the opposite of what it's getting hyped up as.

Considering how limited its set time was, opening band Halifax was quick to show that it was deserving of higher billing on this tour and was easily the most visually engaging band that would perform at the show. Playing songs from its latest album , The Inevitability of a Strange World, the band showed fluid musicianship as proof that its got the legitimacy to back up its oh-so-impeccable style.

From the melodic “Such a Terrible Trend” to the anthemic “Under Fire,” frontman Mike Hunau effectively accomplished the feat of displayed vocal vulnerability without compromising his signature bravado. Similarly, guitarist Chris Brandt had a few tricks of his own, all the while setting in stone that he is the future guitar virtuoso to watch.

Fellow guitarist Adam Charles and bassist Doug Peyton bridged any gaps between band and audience, challenging their listeners to show them what they got. Bringing some much-needed attitude to the stage, the members of Halifax showed any doubters that they are the current masters of doing it without being ridiculously exaggerated.

Now that the crowd was adequately amped up enough to see headliners Sugarcult, irony reared its ugly head and sent the Spill Canvas out instead. Whatever energy Halifax left after its set was slowly filtered out of the venue with every passing melancholy song by Bright-Eyes-in-a-Coma, who really couldn't have finished soon enough.

Luckily, Sugarcult ended naptime with a flashy light show and frontman Tim Pagnotta's ever-humorous, animated gesticulations. The band's methods are tried and true, but there's just something about the intensity it brings to every song, no matter how many times they've been played before, that creates a sense of awe in a listener. If anyone ever says they don't feel the pangs of emo-ness every time they hear guitarist Marko DeSantis' signature opening chords of “Pretty Girl,” they're lying through their teeth.

While DeSantis' intricate strumming balanced Pagnotta's untamed but evocative growling through their career-spanning set list, the fact that every member of the band always looked stoked to be playing was the biggest factor in its live show never feeling stale. Living up to its namesake, the foursome just knows how to keep the masses coming back for more.
Article posted on 9/19/2006
This article has been viewed 1798 times.