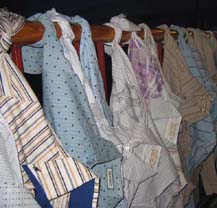 Sew Down, a fashion bazaar featuring both local and out-of-state designers, set up shop and displayed samples of their best work and newest collections. Rows and rows of designers lined up against the wall, trying to woo buyers, prospective customers and schmooze with industry insiders.

Already in its third year, the music-infused fashion event was founded to showcase beginning and struggling talent who may not have the necessary means to put on their own show.

"We’re trying to do an alternative to the Mercedes-Benz week fashion show, [but] with a cooler environment," said founder and designer Atousa G.

Calling the Spring 2005 Sew Down a show for all people, Atousa wanted the general public to witness and be a part of the emerging fashion scene in Los Angeles. Atousa handpicked each designer for their unique styles and fresh perspective.

Take, for instance, jewelry designer Carole Sheperd who has created a line of fun silver earrings with your pick of M-16s, grenades or microphones dangling from their ends. Just about any ordinary object can be a source of inspiration for her.

"What inspires me is pretty much everything around me," said Sheperd with a laugh.

Or take men’s designer Matt Levine, whose quirky and playful line suggests that men, too, can have fun dressing up. Plaid blazers with a slightly disheveled look topped with vintage-like patches and terry cloth shirts built with an optional tuck-in tie was not only refreshing but inventive.

Throughout the evening, every designer present repeatedly emphasized the originality of their unique designs.

A 15-designer runway show late in the night captured the spirit of each designer’s eclectic style. Opening with swimwear and ending with evening wear, the atmosphere was relaxed and loose as models strutted down a runway built inside a 1940s-style indoor swimming pool. A glitzy finale for a special event that provided the icing atop L.A.’s Fashion Week.

Sew Down takes place twice a year in conjunction with L.A. Fashion Week. For more information about Atousa G. and her designs, visit www.a2sa.com.