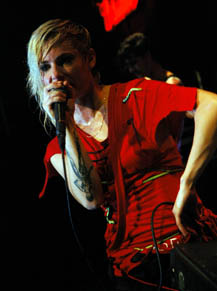 Once you can get past the sickening egotism and faux extravagance of the self-important L.A. kids who would attend a Sounds show because it used to mean you were ahead on the indie trends, the Swedes really do make for a night well spent.

Opening with the full band version of “Night After Night,” from the band's latest album, Dying to Say This to You , the fivesome made it clear early on that it was going to make every person in the venue dance.

Delving into older favorites from the band's previous album, Living in America, with old-school rock-tinged selections like “Hit Me” and “Hope You're Happy Now,” frontwoman Maja Ivarsson and company balanced the dance-inducing pop with a little of their signature grit. As guitarist Felix Rodriguez shredded more furiously than ever, the group showed that even though it is infectiously fun, it still means business when it plays.

Even for all her snarling, growling and muscleman posing between songs, Ivarsson never lost an ounce of her inherent feminine charm as she delicately walked the line between sexy and intimidating … then stage dove clear across said line. Playing off of Rodriguez and keyboardist Jesper Anderberg with teasing gestures throughout the set, Ivarsson showed that above all else, she and her band mates are having fun on stage.

Closing with “Ego,” Ivarsson jokingly stated that her audience had done much to inflate hers over the course of the night and the band showed why it really deserves to be proud of what it does. After all, it's hard to fault a girl who, as the lyric goes, gave her heart to rock 'n' roll .
Article posted on 11/14/2006
This article has been viewed 1035 times.