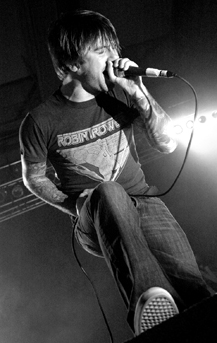 Atreyu and Every Time I Die are both good live bands. Like, really good. There, it's been said and nobody can argue that this is going to be a stereotypically jaded show review. Jaded, possibly, but at least not in the same way as every other jaded review.

Something about this show just reeked of business as usual, same ol', same ol' from the very start. Opening act Chiodos didn't do much to contradict this, playing the same songs a million other bands have played, but inexplicably being met with the undying devotion of a crowd who knew every song word for word. To be fair, any reader who can concretely explain what sets this band apart from all the rest and why they're so deserving of their following can take over the Frequency column.*

Every Time I Die would take stage next and provide the single glimmer of hope for this otherwise perplexing show. Just to make sure that the words “boring” and “forgettable” never come anywhere near their name as applicable adjectives, the Buffalo rockers proceeded to evoke a feeling of monkeys with musical instruments as only they could. From the infectious “The New Black” to old favorites “Romeo A Go-Go” and “Ebolarama,” the band had fans singing along to their surly anthems as they jumped, danced and shredded their way from one end of the stage to the other.

The aural equivalent of a long night of illegal drug consumption, Every Time I Die never fails to make self destruction sound as professionally trained as possible, which more or less sums up their charm. And you just can't go wrong with a cowbell either.

For all the headbanging and fist-raising intensity Every Time I Die brought to the stage, however, it was Atreyu who would surprisingly kill the speed the show was beginning to take up. Delivering the same performance they always give, whether it's Warped Tour, Ozzfest or them headlining, the band members did their same signature poses at the designated intervals, played the same songs they've been playing all along and somehow had their audience eating out of their collective hands the whole time.

Whether it was old songs or new, the band just doesn't seem intent on impressing anyone who's seen them more than once, proving that, despite its oh so introspective and angsty album titles, Atreyu really isn't holding on to anything but mediocrity these days.