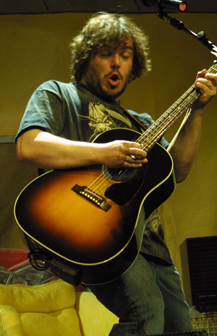 For those who celebrate gut busting humor, stoner jokes and rock in its truest form, the Tenacious D show was the place to be. It's amazing to think two pudgy Angelinos who made six episodes of a self-titled TV series in the late 1990s could become this big. Almost 10 years later, the self-proclaimed "greatest band in the world" finally tackled music videos and now the big screen with Tenacious D and The Pick of Destiny.

A la “This is Spinal Tap” (1984), the D's absurdist humor and insight about the trials and tribulations of a band trying to make it in the music business capture serious moments and melt them into a ridiculously hilarious sketch comedy musical.

The concert was essentially a stage performance of the movie with lower budget makeup, ruining the movie for those who haven't seen it and boring those who have. They used the same jokes from the HBO series and their DVD Complete Masterworks, showing Jack Black is spending a lot of time on film and TV roles rather than coming up with new material with his band mate Kyle Gass.

It just seems the crazy adventures of the D had more charm in miniature rather than in epic length. Not to say that they have lost their mojo over the audience of stoners in any way, it's just that the jokes were funnier the first time around.

Known for their vulgar lyrical themes, crowd pleaser “Kielbasa” set the tone for the magical evening of rock hard proportions. The stage set up was phenomenal, starting as Kyle's apartment and later transforming into a fiery hell equip with a full band.

Tracks off their first release exhibited the pure brilliance of Black's voice and the graceful classically trained rock ballads of Gass. They come off as a joke but can actually shred it like the gods of rock, busting out power balladry of the late ‘80s while also throwing in bridges that rip on faux-mystical ‘70s stadium rock.

They showed a sweet, yet sickening amount of man love towards each other on “Friendship,” “Kyle left the band” and the new track, “Dude (I Totally Miss you).”

With the pin ash of real rockers, they rounded out the show with some older songs, bringing a lost audience back in the saddle. On “Fuck Her Gently” and “Tribute” fans clad in wife beaters and their trophy girl friends cheered equality to the songs sentiments. JB exclaims to fans that if they “Record the man” they will “capture the magic.” Although they are performers, with every joke there is a grain of truth. How much do they believe they are the greatest band that ever was? You decide what's real or not.
Article posted on 11/28/2006
This article has been viewed 1189 times.